According to industry insiders, gigs in the birthplace of heavy metal are being missed off many bands tour schedules due to poor ticket sales. Make of this what you will as tonight’s gig was a big middle finger to any promoter who believes this. The Birmingham scene is alive and well. It’s mid-week and the Institute couldn’t be more full for Three Days Grace and their valiant support act, the new wolf pack on the block, Bad Wolves. 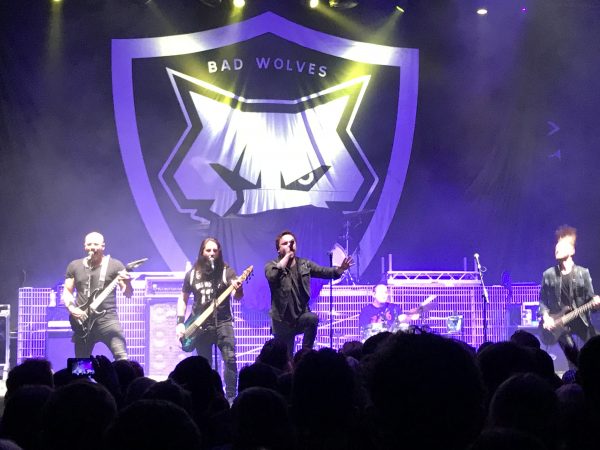 Bad Wolves were up first and let’s face it when your band consists of ex-members from Divine Heresy, DevilDriver, In This Moment and God Forbid, you know you’re in for some neck-breaking metal. Anticipation was high for their maiden UK tour debut but disaster struck and the Los Angeles supergroup dug deep to make this show happen. Photos of Bad Wolves frontman Tommy Vext stuck in a Nottingham hospital (with Pneumonia no less!) began to surface on the morning of the gig and it was unclear whether he would be cleared ahead of the show.

Unfortunately for fans at Birmingham, he wasn’t. But undeterred Bad Wolves enlisted the help of As Lions frontman (and son of Iron Maiden’s Bruce Dickinson) Austin Dickinson and Doncaster Trio Bang Bang Romeo’s frontwoman, Stars. Austin covered the more metal tracks whilst Stars took the reins on the rockier songs. Both guest singers did an absolutely sterling job learning their portion of the setlist within hours and performing as though they were full-time members of the band. 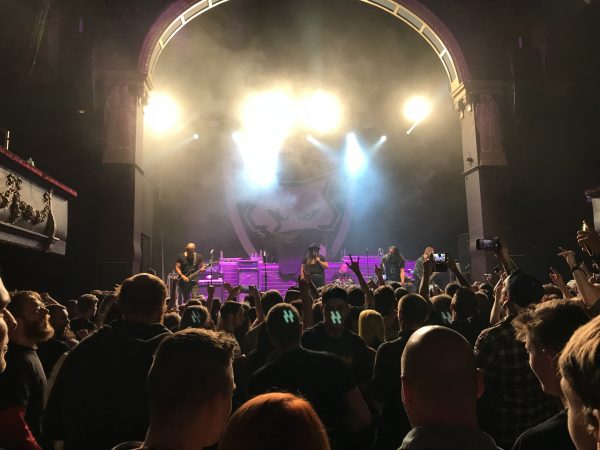 Opening with ‘Learn To Live’, Austin Dickinson stormed to the stage. “No one stand still. Every single one of us, we’re gonna do this for Tommy f*cking Vext tonight!!!” he proclaims. And the crowd is right there with him as the thundering opening riffs kicked in and fists were thrown into the air.  The equally as punchy ‘No Masters’ and anthemic ‘Remember When’ came next with crunchy riffs out in full force.

Stars then took over for the softer ‘Hear Me Out’ with her soaring bluesy voice giving it some serious welly on the chorus. Meanwhile, the bands cover of The Cranberries ‘Zombie’ with Stars on vocals brought the house down in a short but unforgettable set. How many times do you see support bands with mosh pits, lighters and mobile phone torches out without being asked? Never. The fact that this was the reception to the band without their frontman speaks volumes. Metals rising stars firmly cemented themselves as the band to watch. 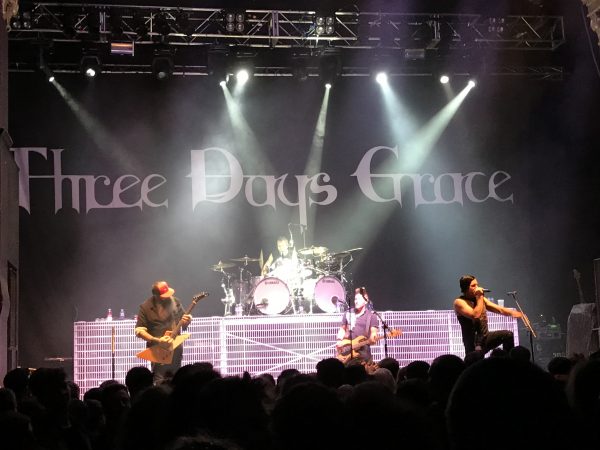 Then came the turn of the headliners Canada’s Three Days Grace for their first UK shows since 2016. 3DG is one of those bands that have songs more famous than they are and tonight’s set is littered with their very best mix of old and new era material.

Opening with the lead single from their new album released earlier this year ‘The Mountain’ before veering into classic territory in the form of ‘Home’, it’s evident that even 20 years since they first appeared on the alt-rock scene that 3DG is on fire.

Things only got better from here as ‘The Good Life’ saw most of the room jump with extra spring as new frontman Matt Walst strutted across the stage before one of rock’s catchiest chorus’ resounded across the PA. Whilst Emo-Kids from 2006 took a trip down memory lane when ‘Pain’ kicked in and new-school fans rocked their hearts out to ‘Infra-red’.

Three Days Grace may only be two albums in with Walst  (ex- My Darkest Days) fronting the band after Adam Gontier’s shock departure in 2013, but he looks and sounds like he’s been with them all along. He has the unique ability to be able to do the old songs justice whilst putting his own stamp firmly on them. And then came the slower songs in the form of 2017s powerful ‘Love Me Or Leave Me’ and ‘sing-a-long’ anthem ‘Get Out Alive’ to resounding applause. 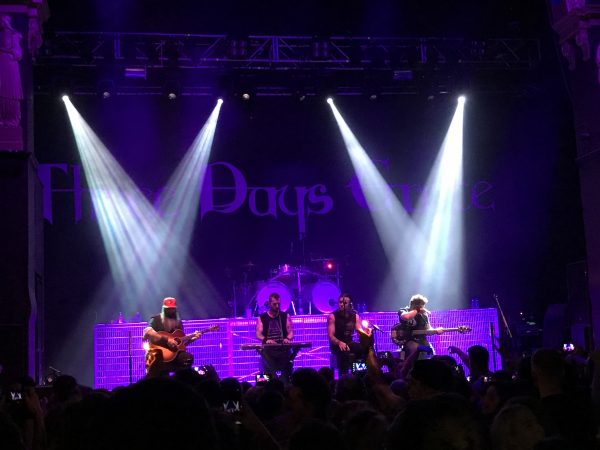 Just when you thought what else could Three Days Grace possibly have up their sleeves they brought out more big guns in the form of ‘Painkiller’ from their debut Walst release. And then it came, the song every single person in the room had been waiting for, ‘I Hate Everything About You’. It might have been released before some audience members were born (way back in 2003!) but still packed an immense punch and a half. Seriously not a soul in The Institute stood still. And there was still more to come… ‘Animal I Have Become’ complete with a breakdown comprising the Whitestripes ‘Seven Nation Army’ riff before the band left the stage.

Cries of one more song swept over The Institute whom 3DG had firmly in the palm of their hand by this point. They didn’t disappoint either with three more songs including the soulful ‘Never Too Late’ and a stellar version of ‘Riot’ which more than lived up to its name as Birmingham went wild.