These Wicked Rivers, John (Guitar/Vocals) – Arran (Guitar) – Jon (Bass) – Dan (Drums), are a Blues/Stoner/Rock band from Derby and have recently released their debut four track EP ‘The Enemy’ and it’s pretty good. On first listen I’m automatically and naturally thinking of bands like Clutch, and not as clean cut as some of the modern Blues Rock bands coming out of the UK like King King for example. The sound is really stripped down and a little bit dirty, but sometimes dirty is nice. The buzz saw sound definitely works on this one.

Opener ‘Ladykiller’ is very Bluesy, and in a rapidly expanding Genre there’s a nice edgy sound here, throughout the EP some nice guitar work with some nice tight drums pulling it all together. ‘The Bottom Of Us’ is a much different beast, it’s got a melancholy 90’s feel to it, but a good track still, just maybe it doesn’t quite fit with the other tracks that are on offer, showing an ability to step outside your normal sound is a good attribute to have though. Penultimate track ‘Can’t Take It’ comes right back into line with a killer bluesy riff that drives it right through the middle.

The frantic opening to ‘The Enemy’ is what you look for with this style of music, it lifts everything up a couple of notches, and you can almost see the band on stage beating this one to within an inch of it’s life,  screaming guitar solos marrying so well with the distorted leads, thumping bass and drums throughout and the vocals tie in really well, I’d prefer if they were a touch deeper in tone (which John uses elsewhere) , but that’s a personal thing. Excellent track this, and it leans more towards the sound of bands like Planet OF Zeus, no bad thing. Nice solo right in the middle of it, and the rhythm section are spot on all the way through.

Great start from what sounds like a really talented bunch of guys, there’s most definitely a lot more to come, hopefully they’re working on a longer release soon. Will be interesting to see the sound they gravitate towards as they develop, but for a self released debut EP, this is  good stuff, get a copy and imagine where these guys will be with a bit more experience under their belts and higher level of production on their music. These Wicked Rivers – remember the name. 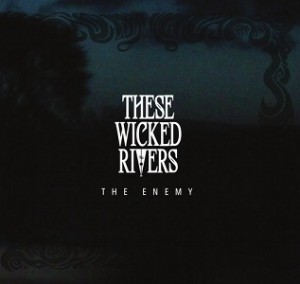