So, what’s with that video? Yeah, it’s a great song with a killer riff but why have those backwoods moonshine runners filmed large parts of it in a British pub? The answer, dear reader, is a simple one. Despite all appearances, These Wicked Rivers hail from Derby. Hot on the heels of two mouth-wateringly good EP’s, the band have released ‘Eden’, their debut album. And quite the check-shirt-wearing, facial-hair-sporting, amp-damaging beast it is too.

So, with the preliminaries out of the way, let’s cut to the chase. We kick things off with some quirky, lo-fi slide, slightly distorted vocals and a song about reading tea leaves. So far, so weird (and cool). But it doesn’t take long before those fuzzed out guitars kick in the doors and These Wicked Rivers begin to fly and, give or take the odd trippy mid song jam, the pace never let’s up. This album is big, long, meaty (snigger) and fuck-off heavy.

It crunches, it bruises, it kicks your ass in a roadhouse car park for looking at its girl. It’s a thug with a hidden sensitive side, it loves its ma. Clearly there are influences – Clutch, Creedence, Cadillac Three, anything at the heavier, dirtier end of the modern Southern Rock spectrum. But it’s also it’s own thing, it’s never derivative. It attacks, cajoles, menaces and thunders forward with the momentum of early AC/DC. And it convinces and impresses – every dusty step of the way.

Let’s not break down every song, we’ll leave that journey of discovery to you. The guitars are uniformly huge – with dashes of Country twang and Southern grease. There is also quite a bit of fuzz and distortion, which is always nice. Groove is key here too, TWR are in no hurry, most songs here run at around 5 minutes and they use that time well, hitting fearsome twin guitar grooves and staying there, milking the burly riffs for all they’re worth. It’s an album that broods, quite a lot. It threatens and gives you the evil eye – “I’m a danger to myself and everyone around”.

Several songs have a metallic edge, there are thumping blues stomps and Cajun sludge shuffles. Just, y’know, guitars dude. They’re all over this, whether locking in to relentless riffs, spinning out into spacey noodles or launching into reckless wig outs, the guitar duo of John Hartwell and Arran Day are nothing less than stunning throughout.

And there are several epics in here too. ‘This Train’ is a huge semi-ballad. It’s mellow intro hints that this is gonna be big…and big it is. The riff, when it appears, is a monster, laced with a hint of grunge. From here on in the heaviness rarely lets up, there’s a mid-song riff worthy of Metallica before it ebbs into a cool acoustic outro. ‘World In Chains’, meanwhile, has more of those swampy John Fogerty vibes. It’s dark, dark Americana – “ridin’ shotgun with the devil”. If ‘Sons Of Anarchy’ was still in production this would be on the soundtrack, fuck heavy outlaw rock, dripping with attitude.

So there we go. This is a long album, 12 songs and almost an hour long. Several songs merge into each other, the onslaught of riffs almost overwhelming, but hey, when the songs are this good that’s no hardship. It’s dirty classic rock with a nod to The South and a contemporary edge. Oh, and a bit of Stoner too, and Biker. Hell, it’s just good is what it is, in fact, one of the best debut albums of the year. Now scoot y’all, go on, go check it out, 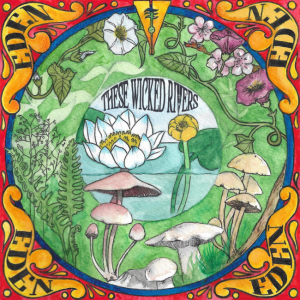