Rising Derby rockers These Wicked Rivers have announced that they will be joined by Manchester-based blues-rock outfit Gorilla Riot as special guests on their upcoming ‘Calm Before The Storm’ tour in March. 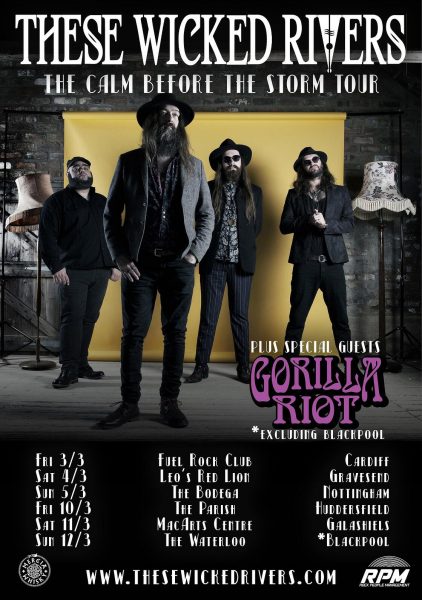 The tour takes in some of Rivers’ favourite spots across the UK including Cardiff, Gravesend, Nottingham, Huddersfield, Galashiels and Blackpool. Gorilla Riot will be appearing at all dates except Blackpool, where Blackburn alt-rockers Bastette will be performing instead.

“We’re stoked to be taking the ‘Riot boys out with us on this run of dates. When they played with us at our recent Crowdfunder celebration show it was such a wonderful vibe between the bands and the crowd and we just want to repeat that up and down the country to as many people as possible. It’s a pleasure to be going on the road with such wonderful dudes, make sure you get involved – get your tickets now to avoid being disappointed!”

“The tour brings a perfect package as both bands have a similar sort of vibe but bring a totally different force to the stage. Every city on this tour best watch out as this is going to be shit hot. Great lads, good boys! We cannot wait!”