Released on 12 June 2017 and reviewed by Allan Jones

Kicking off with a bunch of cowboy western-inspired slide guitar riffs as an opening track, and with a pointlessly capitalised band name, this album had me worried. As a three-piece band hailing from the Peak District, I began to worry that they were getting a little big for their britches (or should that be chaps?) – especially for a sophomore album.

Thankfully, when the proper opening track ‘My Poison’ kicks in, these fears are dispelled somewhat. Probably best described as a hard rock band, it’s definitely an album best played loud. They certainly manage to sound bigger than a three-piece band – massive soaring vocals, big crunchy vocals that go ‘na na na’ a lot just for fun, thundering basslines, and big stompy drums all pile in to create a huge wall of noise. It’s a good job that it’s done with a band who have a great sense of timing and dynamics, as well as a huge sense of fun that comes through in the riffs and the gloriously over-the-top vocal harmonies.

That’s not to say that they’re a one-trick pony – they can soften things up, such as on the acoustic introduction to ‘Sparkplug’ or the romantic ballad stylings of ‘Home’, and they even tackle more serious subjects (such as date rape on ‘Just Go’ where even the guitar work seethes with righteous anger). But overall, the general flow and feel of the album is one of glorious heaviness.

For fans of their debut album, it’s safe to say you won’t be disappointed. New drummer Jake Dalton has seamlessly dropped in, and overall the band has taken a couple of steps forward without losing any of the drive and energy of the debut. If anything, the storytelling and musical hooks have got even better this time around, and while ‘maturity’ might not be the word I’d choose to describe the change, they’ve definitely taken steps in the right direction.

My favourite track is probably the ridiculously joyful ‘Whiskey Business’ with its ‘na na na’ chorus and fantastically chunky guitar riff strutting around like it owns the place, but ‘Paper The House’ comes a close second with an arena rock feel just begging for a live performance to take it over the edge. If this isn’t an opening track on their tour, they’re totally missing a trick. Overall, it’s a lot of fun, and well worth a listen. 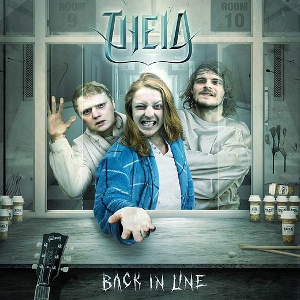