May 1991 saw the release of The Wonder Stuff’s third album ‘Never Loved Elvis’ which stormed the UK chart at number 3. Undoubtably one of the most influential albums of the decade, the record features top 10 hits ‘The Size Of A Cow’, ‘Welcome To The Cheap Seats’ ‘Caught In My Shadow’ and ‘Sleep Alone’ alongside crowd favourites ‘Mission Drive’ and ‘Maybe’ to name but a few. 30 years on the record has been rereleased in multiple formats and still stands up as one of the greatest indie albums of all time, unsurprisingly the million-plus seller has just been re-issued on vinyl by Universal Music for HMV’s Centenary celebrations. 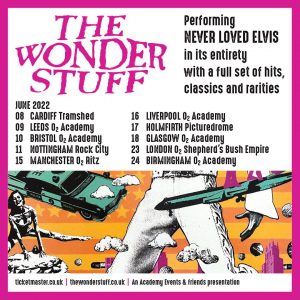 Due to the pandemic The Wonder Stuff have not been able to tour since their sell-out 2019 ‘Better Being Lucky’ outing.
However, in June 2022 the twelve legged groove machine will be hitting the road again, playing 2 sets each night. They will perform ‘Never Loved Elvis’ in its entirety before playing a full set of hits, classics and rarities from they’re extensive 36 year catalogue.

Catch them throughout June at

Alongside front man Miles Hunt on guitar and vocals is only other surviving original member Malcolm Treece on guitar, the longest standing fiddle player Erica Nockalls, Mark Gemini-Thwaite (The Mission, Tricky, Theatre of Hate) on guitar, Eat’s Tim Sewell on bass and Pete Howard (The Clash, Queenadreena) on drums.

Since the band’s formation is 1986 The Wonder Stuff really has had an amazing journey so far, selling millions of albums worldwide and continuing to record and tour internationally. The band has remained at the top of their game and continue to play with a passion and attitude that has set them apart from most of their contemporaries.