Shit! That’s some video! Great song too, but you might need to go back and listen to it without the video, those visuals can be a bit of a distraction. Welcome all to ’21st Century Love Songs’ and the heady sound of The Wildhearts giving zero in the way of fucks. If you’re a fan of Ginger and co. you’ll know that’s when they’re at their best and The Wildhearts at their best are a pretty un-fucking-beatable proposition.

So let’s cut to the chase, dispense with the formalities, forego the introductions. Back in the carefree, innocent days of 2019 (remember those?) I reviewed ‘Renaissance Men’, knowing instantly that it would be my album of the year. It was. This is better. Lot’s better. And that’s not to say that ‘Renaissance Men’ has gone down in my estimation, no chance, in any other year it would still be my album of the year, it’s just that this year we have ’21st Century Love Songs’.

Let’s try not to give too many surprises away or go into too much detail, that wouldn’t be fair on you, the listener. You need to come to this with a fresh pair of ears, to experience the adrenaline rush of one of our greatest bands firing on all cylinders. Since album one, Ginger has been one of our finest songwriters and he’s on prime form here, seemingly cramming more imagination and creativity into one album than most bands manage in an entire career.

From the opening, thunderous intro it just gets more, erm, thunderous. We’re instantly into a classic Wildhearts groove –  from metal into a breathless punk/Cardiacs full-bore charge and from there into a final, stratospheric riff-out. As ever with the Wildhearts, it’s all about the riff and there are more of them here than you can shake a B.C.Rich at. They come at you from all directions, shape-shifting like Cameron’s T-1000.

But, this being The Wildhearts, there’s a shit-load of other stuff too. Sure, some tracks sound like five feral songs trapped in a bag, fighting to the death, but there are killer melodies too, lot’s of them, harmonies worthy of the Everly Brothers, weird little Brian Wilson-y percussive segues, glorious, almost throwaway moments of genius spiralling off in all directions, like sparks from a catherine wheel.

And it just keeps going. It’s draining, leaving you exhausted, but in a good way. The fast, fuckheavy ‘Institutional Submission’ sounds like Ginger is trying to cram every riff in his head into one 5 minute song. Songs suddenly become other songs, it’s playful, experimental – yet there’s a cohesion to this album, it’s a fluid thing, organic. ‘A Physical Exorcism’ sounds a bit like ‘Suckerpunch’, but heavier, wrapped in industrial clatter while ‘Directions’ gives a fair approximation of Steve Jones playing Metallica.

Ginger has said that, as ‘Renaissance Men’ reminded him of ‘Earth Vs. The Wildhearts’ (surely a serious contender for best debut album ever), so ‘Love Songs’ reminds him of ‘P.H.U.Q’, and I can see that – it’s polished, chock full of instantly memorable riffs, given to exploring more side roads. But, for me, this is even better. It’s the sound of confidence, a band on a roll who know how good they are and have decided to see how far they can take that confidence. It’s loose yet full of precision attack, playful yet angry, joyous but still fucked up and aware that it could all fly off the rails at any moment.

If you were a fan of the band back in 1993 you wouldn’t have put money on them still being alive in 2021, let alone this fucking good, thank God they’re both. If they keep this up they’ll be getting all respectable on us.

Released by Graphite Records on 3 September 2021 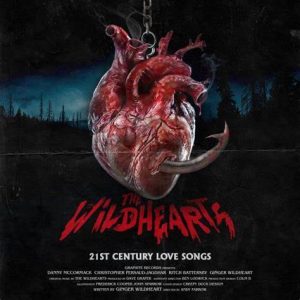