There are two quotes in the intro to this DVD that sum up this concert. “I hope The Who never became complacent” says Roger Daltrey in voiceover as West London mods converge upon Hyde Park and then Pete Townshend walks onstage, surveys the assembled crowd and says, “you are a long way away. But we will fucking reach you”.

And that’s what The Who does better than anyone else, plays big songs to huge amounts of people. Their songs are constructed for maximum impact – huge power chords, long, increasingly powerful codas, grand gestures – they virtually invented stadium rock – as Townshend (rocks great philosopher) once said, “you do something big on a stage and a thousand geezers go ‘Aaaaah'”.

And so the band’s latest configuration takes to the stage for a no frills 50th anniversary greatest hits show. They kick off with a clean, tight barrage of early hits, including their first single ‘I Can’t Explain’ and ‘Pictures Of Lily’ (requested by Paul Weller). ‘My Generation’, which should be embarrassing, is surprisingly fiery, the crowd roaring along, swept up in the momentum.

Then it’s singalong time. ‘Join Together’ in particular giving the masses a chance to, erm…join together with the band. ‘Quadrophenia’ is tackled next, including the best ‘Love Reign O’er Me’ I’ve heard, incredibly powerful, Townshend soloing with passion while Daltrey nails the vocal.

Rock opera ‘Tommy’ gets a medley next. this seems to be a section of Who gigs that always inspires Townshend and he doesn’t disappoint – he plays with snap and venom, conjuring up an almighty noise – the man who invented big power chord finishes giving us a, well, a big power chord finish! The usual big hitters follow, Townshend windmills ‘Won’t Get Fooled Again’ into submission and it’s all over – The ‘Ooo don’t do encores!

Always rocks angriest man, Townshend seems relatively cheery and benign while Daltrey clearly has a portrait in an attic somewhere! The band back them up well, Townshend’s brother Simon on rhythm guitar, Ringo’s son Zak Starkey on drums and the brilliant Pino Palladino on bass, wisely not trying to steal Entwistle’s thunder. Three keyboardists round out the band including ‘musical director’ Frank Simes (why do oldie bands, who have coped admirably thus far, suddenly decide to hire musical directors?).

It’s an enjoyable gig. Ok, it can only ever be Who lite, how could men their age ever hopes to recreate the once in a lifetime sound and fury of the Moon/Entwistle years? Messy, wild, angry, destructive, pissed off, fucked up and LOUD! Arguably the best, most thrilling live band in the world. Or even the 2000 comeback tour where Townshend got his tinnitus under control and again was able to pick up an electric guitar – playing with a renewed fire and focus and ear splitting joy. Despite this, they are still the most genuine and unpredictable of the stadium bands – evinced by this year’s Glasto headline slot – Townshend ribbing Kanye, while a hacked off Daltrey ripped down the Perspex screens surrounding Starkey. This is a beautifully recorded and filmed reminder of one of rocks greats giving it some bollocks on what could be their last stand. There’s no one else like them – cherish this. 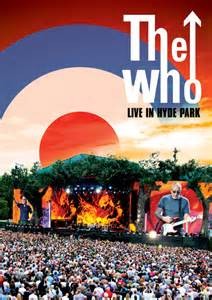 The Kids Are Alright

I Can See For Miles

You Better You Bet