Hot on the heels of their splendiferous new album War Is Over, Finland’s Von Hertzen Brothers began a two week trek around the UK, including trips to North Wales to appear at both Hard Rock Hell and HRH Prog, with a gig at Nottingham’s Rescue Rooms.

The band are using a variety of support bands on the tour, for Nottingham it was local trio The Parallax Method, who have been getting some serious attention both in magazines and online. They came on slightly earlier than advertised, but their start was almost derailed by problems with the bass guitar, which bassist Ben Edis appeared to solve by the simple method of changing his lead. If you noted that drummer Dave Wright was wearing a Tech Fest t-shirt and bassist Ben Edis a Primus one, you would have a pretty good idea of what the band were about to deliver. It was highly accomplished, very technical rock, and for most people, I suspect, probably a lot more fun to play than to watch live. After ten minutes of music, with no obvious breaks,  and if you were unfamiliar with the band, there was no way of knowing if this was a single number or five 2 minute pieces, at which point, guitarist Danny Beardsley gave a brief introduction, explaining for those who hadn’t worked it out already that they were an instrumental band, and that was the limit of the interaction with the audience. The reminder of the band’s half hour on stage proceeded without a break in the music, again with no indication as to whether it was a single piece or several shorter ones, or even if the band were improvising. Brilliantly played, but baffling.

It’s always a balancing act for a band to decide how much new music to include in a set, even when the tour is to promote a new album, but for the Von Hertzen Brothers, the decision was clear and the whole set was built around their new album including opening with the title track, a twelve minute monster that moves through several moods, leading singer and guitarist Miko to joke about the number of girls queuing for the Neck Deep gig in Rock City next door, while here were his band playing twelve minute Prog metal songs. ‘Twas ever thus, Miko. The new album dominated the first set, with only a surprisingly heavy version of ‘Miracle’ breaking up the flow of new material. The highlight of the new songs was ‘The Arsonist’, which has the same kind of chugging opening as Queen’s ‘Now I’m Here’, something highlighted by guitarist Kie Von Hertzen singing a small part of the Queen lyric as he played the intro. Suffice to say that the song itself, is superb, as good as anything I’ve heard this year and right up there with the best the band have recorded to date. I also liked ‘Long Lost sailor’, which almost has you thinking the band have taken a bizarre turn toward Pirate Metal, but still has the Von Hertzen’s stamp all over it. 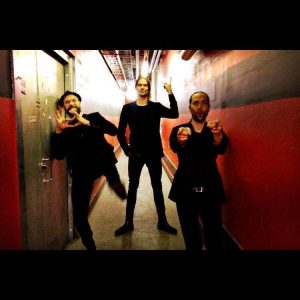 With the album only having been released a couple of days before this gig, it’s likely that the new songs weren’t at all familiar to the majority of the crowd, but nonetheless, they got a great reception and there were frequent murmurs of approval and ‘great song’ as the set progressed, but as if to reward the crowd for their patience, the band eased back and went back their beast songs for most of the second half of the set. ‘Sunday Child’ got a big cheer, with Miko inducing them to sing along, as did the terrific ‘Gloria’, although the band seemed momentarily disconcerted by a cry of ‘Carry On Wayward Son’ by a no doubt well refreshed member of the audience. ‘What shall we play’, mused Miko, suggesting ‘Always Been Right’, but he seemed disappointed with the response, so brought the anthemic ‘Flowers and Rust’ forward in the set, but the band then played ‘Always Been Right’ afterwards anyway.

As the set headed towards the end, the band were hitting such a peak, it was hard to believe that this was the first date of the tour and the first time this set had been played in full. ‘Coming Home’ is a brilliant song at the best of times, but here it can only be described as uproarious, and while it might have seemed odd to follow this, and end the main set, with another new song, but when it’s the brooding and epic ‘Before The Storm’, which sounded superb on this first hearing, I don’t think anyone minded. Another new song to begin the encores, ‘Wanderlust’, before ‘New day Rising’ rounded off over a hundred minutes of a tremendous gig. There’s always something a little different about the Von Hertzen’s, their music is often surprising and unconventional in a quite subtle way, but as a live band they unfailingly deliver and they really are well worth seeing, especially when they’re on this kind of form.