Another terrific box set from Cherry Red records, Waiting for the Weekend pulls together the early albums and rare cuts from 80’s New Wave favourites The Vapors. With an impressive 76 tracks across 4 CDs the set includes albums New Clear Days and Magnets along with associated b-sides and single remixes. In addition, there are rarities, unreleased demos, rough mixes and an eleven track recording from a live performance at The Rainbow on 3rd December 1979. Lastly, there are three unreleased tracks; ‘Move’, ‘Secret Noise’ and ‘Caroline’. The band themselves have been closely involved with the project which makes it all the more appealing. 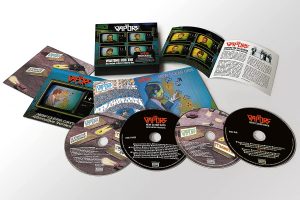 Formed by singer/guitarist Dave Fenton in 1977, he eventually recruited drummer Howard Smith, guitarist Ed Bazalgette and bassist Steve Smith; this version of The Vapors playing their first gig in March 1979 and soon coming to the attention of the Jam’s Bruce Foxton. A tour with The Jam duly followed and in early 1980 ‘Turning Japanese’ saw the band hit number 3 in the UK and break into the Billboard Top 40. Surprisingly they never achieved another hit single with debut album New Clear Days also being sadly overlooked. This has some great new wave numbers set to dark and thought-provoking lyrics such as ‘Letter from Hiro’, ‘Cold War’ and ‘Sixty Second Interval’.

Magnets appeared at the end of 1981 and the darker lyrical themes continued with ‘Civic Hall’, ‘Spiders’ and ‘Can’t Talk Anymore’ dealing with matters ranging from assault to mental illness. Lack of record company support meant the album failed to build on some positive reviews and The Vapors disbanded soon after. Whilst not as immediate as its predecessor, Magnets still has some good moments and, had they been given enough time to develop, suggests the band would have had a bright future. The additional discs make this a very comprehensive release, proof enough that the band were much more than that one hit single, and is well worth checking out.

Having eventually reformed and released a new album, Together, in 2020, The Vapors are back on the road this month in support of the fortieth anniversary of New Clear Days, check out http://www.thevapors.co.uk/ for the dates and more.