The result of collecting the best tracks from two stellar Undertones albums was only going to be amazing and the sparks certainly fly on Dig What You Need. Taking seven songs from 2003’s Get What You Need and six from 2007’s Dig Yourself Deep the resulting record is a short, sharp, shock that perfectly encapsulates The Undertones’ modus operandi. It’s punky, poppy and gets straight to the point and is worth half an hour of any one’s time.

When The Undertones reformed in 1999, sans Feargal Sharkey, I must admit to feeling rather dubious. His voice was so unique and integral to the band’s sound I wondered how on Earth they’d continue but Get What You Need soon put my worries to rest and two tracks from that opus kick off this collection. It works precisely because Paul McLoone is his own man, bringing a new dimension the party, and when his vocals ring out they ring out confidently. New singer they may have but it’s the same old Undertones; discordant guitars chime melodically, the rhythm section pounds a solid back beat while sublime harmonies float atop, and it’s all wrapped up in a tale of teenage angst. In short, ‘Thrill Me’ is a delicious piece of ear candy that will rattle round your cranium for quite a while.

Proving that Get What You Need was no fluke the following Dig Yourself Deep continued the good work and serves up more of that good time garage rock that The Undertones do so well. If anything, Dig Yourself Deep was slightly more nuanced and occasionally veered into Nuggets-inspired psychedelia (‘Fight My Corner’) and rip-roaring blasts of pop punk (‘We All Talked About You’). Many of these tracks remain in the bands live set and on this evidence it’s easy to hear why. They’re very pogo inducing and should have all but the frail and infirm up and dancing. With their focus on the minutiae of modern life there was always something very relatable about The Undertones and if you weren’t a fan of the band at the start of Dig What You Need, you will be at the end.

There’s an urgency and energy present that renders the 13 tracks totally timeless and each of these songs could quite easily have been released at any point over the past 45 years. The album has been sequenced in a manner that delivers shock after shock and, with only two songs breaking the three-minute mark, by the time we reach closer ‘I’m Recommending Me’ we’re left windswept in its wake. Paul Tipler (Stereolab, Placebo, Julian Cope) has remixed these tracks and his magic has brought to the fore subtleties that were buried on the original. Slight vocal inflections and amplifier buzzes reveal themselves like a lotus flower and while you won’t find familiar songs acting in strange ways the new mix makes for an intriguing listen.

It’s the first time on vinyl for the tracks that comprise Dig What You Need making it an essential purchase for both the newbie and long-term fan. You need this album. Dig it.

* Get What You Need 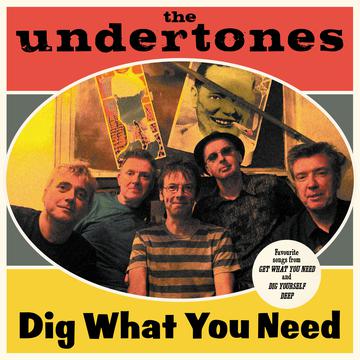