It’s not about me of course, but whenever I watch a rock/metal band documentary, oops, sorry, rockumentary, I’m reminded of just how amazingly accurate the Spinal Tap movie was. It hit all of its targets – pompous and pretentious performers; way over the top hyperbole; crass commentary – with unerring accuracy. It took what is a ridiculous premise – grown men in dumb costumes, with absolutely no self awareness, singing songs about love and lust – then warped it into a savagely funny story, filled with hilarious, unironic dialogue.

That’s not to suggest for one moment that The Scorpions fit into that category. No real rock band could be like that, right?

The basis of this documentary – the band’s two year long farewell world tour, 2010/2012 – has of course been undermined by the fact they then chose not to retire. That’s a true Spinal Tap moment, like not being able to find the stage or discovering, when you get there, you’re in the wrong city. So, on the surface there are similarities, but drill down, and the real band and the real story is revealed. In fact, the real point of this documentary is the justification behind the decision to continue, and it’s just so obvious you don’t see it until it’s right in your face.

Let’s be honest, the prematurely balding Klaus Meine was the unlikeliest rock star you’re likely to encounter, yet he fronted a band that’s sold 100 million albums worldwide. And they began, much like many rock bands begin, with childhood friends sharing a love of music and experiencing that revelatory moment – in this case, the Schenker brothers hearing Elvis Presley and Buddy Holly on the radio – that kick started their career in rock’n’roll.

Like any story of artists who trade in emotion, there are some arresting moments here: Producer, Dieter Dierks describing the slow motion process of putting English language songs together in the recording studio. Schenker – a true driving force – describing the importance of singing in English and conquering the USA. And indeed some touching moments too, like the salutary tale of Schenker and Meine crying themselves to sleep after another grindingly tiring, unrewarding day on the road, back in the days they had just started touring.

Where Schenker led, the others followed . . . to the USA, as planned; to the Far East/Asia, as planned, and to Russia, as planned…and if any song/single captured the 1991 zeitgeist, it was truly ‘Wind Of Change’ – a symbolic anthem of political transformation. Fourteen million copies sold.

The deeper you immerse yourself in the story, the more impressed you become by this band’s ambition back then, and now too, no doubt. We learn, if we didn’t already know it, that perseverance is definitely a component of success, but it’s more than that . . . it’s drive, it’s vision and yes, it’s luck. Like moving from RCA to Mercury Records in 1978…that led to the recording and release of Lovedrive, considered by many to be a career defining album, and certainly a key commercial breakthrough for the band.

The documentary concludes with he band reaffirming their determination to continue “as long as Klaus has a singing voice”. But tellingly, the last word comes from Matthias Jabs, “when you’re living the dream, everything else is a nightmare”.

The second of the two DVDs in this package is a recording of the band’s “final concert” in Munich, 2012. It’s emotional, it’s engaging, it’s long – 21 tracks, an hour 49 minutes – and the sonics are magnificent… money’s been spent here. In and of itself, no matter the occasion, it’s as good a testament of the enduring rock of The Scorpions as any recording you’re likely to find. But as good as this may be, the real quality entertainment is in that first disc. As a Scorpions’ primer, it’s second to none. 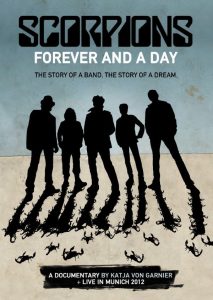