The Stones‘ career is best considered after tripping through Nick Kent’s down the rabbit hole musings in ‘The Dark Stuff’. Or viewed through the lens of Andrew Loog Oldham’s ‘Stoned’. Oldham’s role in transforming a bunch of callow youths into bona fide rock’n’roll giants can never be overstated. Thanks to his early influence (and his use of the “locked door” approach), they came to realise the importance of writing their own material. Arguably, they would not otherwise have become the awesome, world straddling rock band they have been for two generations, and songs like ‘Start Me Up’, ‘Brown Sugar’ and ‘Honky Tonk Women’ would certainly not otherwise be lanndmarks on rock’n’roll’s journey through the last 50 years.

Conventional wisdom has it that the true test of a great song is how it sounds stripped down, minus the polish, the overdubs. So it’s always something of a risk. Bands like Kiss and Nirvana provided a guide on how do it right on MTV’s ‘Unplugged’ series. But it laid many other bands bare, revealing a paucity of compositional talent even among those artists whose songs gained regular radio airtime.

What is this not? It is not ‘unplugged’. It is not an acoustic collection. It is also not a reissue of the Stones’ 1995 release Stripped, that anodyne, woolly mixtape of watered down tracks that made up a single DVD. This is the new, improved collection, featuring a different set of spiky, edgy selections from the original sources.

And there are many worth highlighting. It kicks off with a fabulously ramshackle version of Buddy Holly’s ‘Not Fade Away’…one man’s perfunctory performance is another man’s Spartan arrangement. On disc, ‘Jumpin Jack Flash’ always seemed pumped up…inflated beyond its rightful position. Here, the arrangement and performance are quietly epic. Richards’ sinewy guitar and a spare arrangement spin it into a powerful groove, but the band’s bloodless first attempt at a cover of ‘Like A Rolling Stone’ misfires, mainly by being overly reverential.

Indeed, it’s probably the songs born of the band’s dalliance with Americana – ‘Dead Flowers’, ‘Faraway Eyes’ and ‘Shine A Light’ – that most impress here. The band’s honest, if occasionally tongue-in-cheek delivery beautifully evokes the glamourised image of dirt roads and pickup trucks that we might associate with Gene Clark, Dwight Yoakam or any decent Gospel choir. It’s a direction many wish the band had explored further, and is perfectly suited to Jagger’s mid Atlantic accent, but sometimes when your field of fire is widened, you can’t focus on the target.

The accompanying DVD has been liberally expanded from the original’s miserly running time to an impressive 90 minutes. There are rehearsals, interviews and footage of the band in the studio. More notably, this new edit contains differing interpretations by the band of their songs…probably the most interesting aspect of the whole recording.

The stripped down, positively skeletal version of Totally Stripped includes one CD and one DVD, with the tracks distilled from two studio sessions and three live shows. There are variants, rising to Totally Bloated packages of 5 CDs, a DVD and a hardback book. You pays your money etc.

It’s hardly an entry level package for anyone left in the world who hasn’t even heard of the band, but is clearly one that perhaps only completists will cleave to. Good value though, and a catalogue of performance demonstrating once again why they are the world’s greatest rock band. 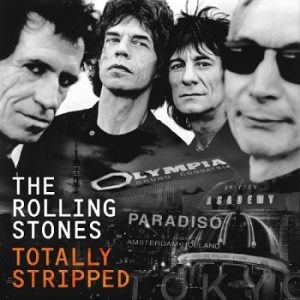