The Rolling Stones return to London this summer for two nights at American Express presents BST Hyde Park on Saturday 25th June and Sunday 3rd July, 60 years on from their first ever show at the legendary Marquee Club in London. Tickets go on sale at 10am Friday 18th March. 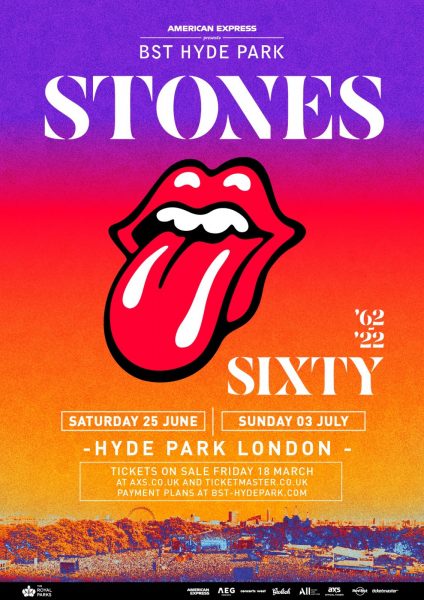 The Rolling Stones mark their 60th anniversary this year and BST Hyde Park is the place to celebrate. Mick Jagger, Keith Richards and Ronnie Wood return to the Great Oak Stage this summer, once again joined by Steve Jordan on the drums.

The Stones will treat fans to a set list packed full of classics such as ‘Satisfaction’, ‘Paint It Black’, ‘Tumbling Dice’, ‘Sympathy for the Devil’ and ‘Gimme Shelter’ but each night at Hyde Park they will include surprises from half a century’s worth of their classic hits. As always, when the Rolling Stones come to town, they will bring an incredible production and state of the art stage design.

The Rolling Stones and Hyde Park have a rich history to say the least. Their 1969 show Stones in the Park is one of the most famous concerts of all time. The concert was a magical moment in history, though the true number was never known, between 250,000 and half a million people came to see the band return to where they truly belong, back on the live stage.

They then returned just once in 2013 to open BST Hyde Park where they played two sold-out shows to 130,000 fans, resulting in an award-winning concert film ‘Sweet Summer Sun: Hyde Park Live’, directed by Paul Dugdale. This show kick-started a long line of once in a lifetime moments at the festival, including iconic performances from Celine Dion, Stevie Wonder, Tom Petty, Barbra Streisand, Carole King, Bon Jovi, Kylie Minogue, The Who, Blur, Kendrick Lamar and so many more. There is no doubt that this year’s Stones show will go down in history as well.

Today, the Rolling Stones also announce an additional UK date with a show at the iconic Anfield Stadium in Liverpool on Thursday 9th June 2022, part of the band’s new European tour ‘SIXTY’.

Jim King, CEO of European Festivals at AEG Presents, says, “Whenever Hyde Park is mentioned, it’s impossible not to think of The Rolling Stones. Two nights on June 25th and July 3rd cap off an incredible line up for BST Hyde Park 2022 but nobody brings it like the Stones when they’re on home turf in London.”

London’s festival is back for THE celebration of the summer. After two years away, American Express® presents BST Hyde Park returns for the 8th edition for more unique shows and unforgettable music moments, and a huge and eagerly awaited celebration for the nation. The festival has been at the centre of London’s summer since 2013, bringing the world’s biggest artists to the greatest outdoor venue in the world over consecutive weekends with a host of free activities and entertainment during their midweek programme, Open House.  And we cannot wait to welcome everyone back.