There’s a “quiet one” in almost every band; a member who is slightly detached from the rest of the band. Usually they’re an observer, an archivist and amateur historian and in the case of the Rolling Stones that role fell on bassist Bill Wyman. While the Stones’ circus travelled the world and left a trail of destruction in its wake Bill, a fastidious collector, documented it all through sober eyes. This film finally gets under the skin of the Rolling Stones and shows why it’s sometimes best to be The Quiet One.

Documenting a tough upbringing on the rough streets of Penge, South London, Bill narrates this film in his lovely warm brogue over archive footage. For the first time he opens the private door of his soul and bravely exposes it to the world and tells how the boy Bill Perks evolved into the man Bill Wyman. Like many of his generation he found escape through rock n’ roll and after meeting the Stones the rest, as they say, is history. However, if you think you know the full story then think again. Director Oliver Murray (along with Bill’s help) puts a new slant on a familiar tale and presents nuggets of information even the most obsessive fan will find illuminating while contributions from the likes of Charlie Watts and Eric Clapton add weight to Bill’s story.

Of course, keeping a straight head doesn’t insulate you from life’s travails and his life was a roller-coaster; the death of Brian Jones, the Altamont disaster and an ill-advised marriage to Mandy Smith were events that could have been glossed over but, true to the spirit of the film, they’re regaled with a refreshing honesty. But, for every low there’s equal highs such as recording at Chess Records, sessions with Howlin’ Wolf and if you were ever in doubt of Bill’s humility then check The Quiet One when he tearfully recalls meeting his idol, Ray Charles. It’s a heart-warming moment, especially coming from someone in an industry where inflated egos run rampant and it’s nice to see Bill’s kept his feet firmly on the ground.

In a band full of larger-than-life personalities, it was quite easy for Bill to slip under the radar but this film, told from his perspective, adds a whole new dimension to the Rolling Stones’ story. With access to Bill’s huge personal archive this film will please the hardcore fan and curious alike. As his bandmate Keith Richards relates in The Quiet One: “If I wanted to know what I did in those years, I’d have to ask Bill Wyman”. 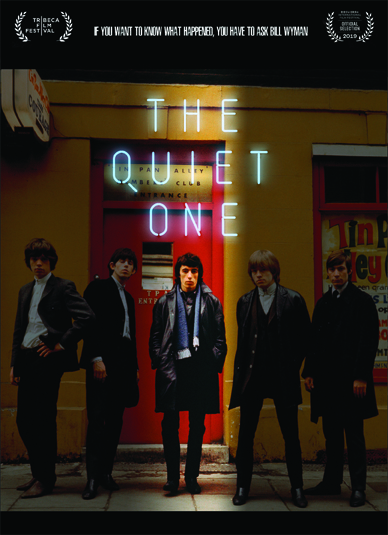