Formed in 2010 and hailing from the badlands of Luton HAZARD get the evening off to an explosive start. Powered by a youthful enthusiasm they open with ‘Sorry Ain’t Enough’ and don’t take their foot off the throttle for the next half hour. Just like their name they deliver a set in caps rage as the rhythm section lock in tightly and vocalist/guitarist Conor Hussey leaping like Dee Dee Ramone on springs. However, for all their fury there’s a strong focus on melody that renders tracks like ‘Get Outta My Head’ and ‘Bad Habits’ real earworms and it’s testament to the strength of their own material that they sit easily alongside a cover of the Clash’s ‘Safe European Home’. 2016 single ‘Freedom Fighters’ caps an impressive set and this tenacious trio prove that the future of punk is in safe hands. 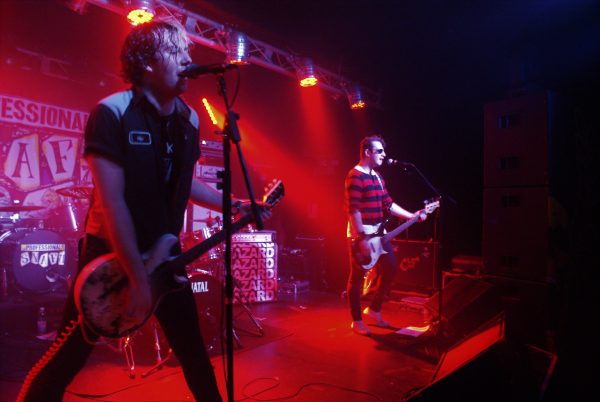 Desperate Measures roots reach back to 1981 and the New Zealand punk scene. After a lengthy hiatus they reformed 10 years ago (with original vocalist Eugene Butcher at the helm) and very much have a second wind. Latest EP Rinsed attests to their rebirth and ‘Scars And Memories’ from that release kicks things off in a rowdy, roughhewn style. With a combined age well into triple figures Desperate Measures play with an energy that belies their years. They pick up the gauntlet thrown down by HAZARD, run with it, and with a sassiness that reminds me of early New York Dolls. Tonight’s set is largely culled from Rinsed with ‘The Rich-Tual’ being particularly punchy and ‘Flowers At Your Door’ a brooding beast. ‘1984’ (from their ‘82 single) is delivered with the thwack of Killing Joke while set closer, a cover of The Stooges ‘I Wanna Be Your Dog’, raises more than a few smiles. To paraphrase Iggy Pop: “When you play live, you gotta stomp on it”. How? Like Desperate Measures!

Using The Specials’ ‘You’re Wondering Now’ as an intro tape sets just the right tone and turns the tangible buzz that surrounds The Professionals into pure electricity. Their 1981 debut album I Didn’t See It Coming was a solid release that suffered from a weak, reedy production but tonight’s opener ‘Payola’ (from that album) rights a few wrongs and it’s delivered with the weight it deserves. ‘Going Going Gone’ from 2017’s comeback album What In The World follows and despite the 36 years that separate the songs they nestle together nicely.

Not as flamboyant as some drummers Paul Cook is often criminally overlooked when it comes to discussions of legendary tub thumpers, but he certainly makes his presence felt on a raucous rendition of The Professionals first single ‘Just Another Dream’. Paul’s the only original member from the band’s first tenure but he’s surrounded himself with some fine musicians including vocalist and guitarist Tom Spencer (Yo-Yos and ex-Lurkers), guitarist Chris McCormack (3 Colours Red) and Toshi JC Ogawa (replacing original bassist Paul Meyers) who all conspire to replicate The Professionals’ signature sound.

Latest album SNAFU has already garnered great reviews and on the strength of ‘Spike Me Baby’ and ‘M’Ashes’ they’re thoroughly deserved. Thankfully, the band haven’t turned their backs on their past and there’s plenty of fan favourites such as ‘Silly Thing’, ‘1-2-3’ and a well-deserved encore of ‘Stepping Stone’ on which the band imprint their inextricable mark and ensures that no one departs disappointed.