Yeah Boiii… arguably hiphop is as important to American street kids as punk was to us over here.  You’d have to have lived under rock to not be familiar with at least a few Public Enemy songs; it’s a name that’s up there with Run DMC and NWA.  So tonight in a rainy Brum far from the streets of New York and some 30+ years later, it was always a matter of could Public Enemy convert the neutrals, deliver for the hardcore fans and convert the naysayers of hiphop?   In short, at a venue of this size, with tonight’s sound and as someone who owns a Public Enemy record… no.  Maybe the scratching in Public Enemy was never understated but tonight the DJ can barely stay in time, and after he does a ‘solo’ obliterating Smells Like Teen Spirit by Nirvana, you’re just not quite sure what the hell is going on.  There’s some nice moments of sentiment, and an attempt for a moment of silence in light of recent events which is mostly obliged, but unless you’re a big fan, which there are certainly some Public Enemy tees and enthusiastic faces around, tonight isn’t the night for the neutral or non believers.

Ok getting the big negative out of the way early on.. and as mentioned earlier.. the sound.  In a day an age where we have surround sound on our TVs, why oh why in a venue the size of the Barclaycard Arena are we supposed to accept one set of speakers front of house with the guys a quarter mile back at the end of the arena probably able to have a conversation with each other during performances?  Tonight’s big shame has to be that a Prodigy performance should be a completely immersive experience where you want to be in the middle of a wall of sound and not hearing it from a one dimensional angle.  This is echoed when later in the set Max requests that the sound man turn it up.. maybe more stage banter than an actual request, but it feels apt.  If you’re in the first fifth of the venue then it’s probably loud enough to get caught up in it from the get go, and it doesn’t take too long for the party atmosphere to filter down the 5000+ (according to my ticket number) strong standing area, and there’s also plenty of people on their feet in the drawn back tiers.  By the third track in, ‘Omen’, the bass is traveling a little further and we’re starting to get a little more caught up in it all half way down at least, where the floor under our feet is bouncing!  That’s a hell of a lot of floor space to be moving under your feet and it’s a wee bit unnerving with just how much give there is, yet it is quite an amazing experience equally with such a huge diverse cross section of people sharing a moment.

Prodigy have always forged their way for a genre in which they probably truly stand alone with a mix of live instrumentation and electronics, accented of course by their quirky brash in your face ways. Two big screens flanking the stage of grainy black and white and 90’s video effects play close ups of the band, and we’re treated to light shows consisting mainly of strobes while Keith and co do the best to make the most of the space on stage. 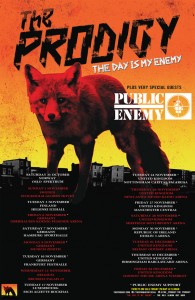 People are buzzing, the small pocket of space just in front of us traps travelling fans who filter in and out and utilize it to have their own mini raves and let go a little, and there’s plenty of defining moments such as self proclaimed anthem ‘Smack My Bitch Up’ which again has the crowds complete attention in unison.  What’s nice as an old skool Prodigy fan is hearing tracks such as ‘Everybody In The Place’ and ‘Voodoo People’ to name a few, but there’s also some artistic liberties too.  ‘Firestarter’ is a little less true to record.  It seems that even the Prodigy could be a bit sick of some of their career defining moments that they feel they need to mix it up a little to keep it interesting, even if just for themselves, but there’s enough big hitters in the set to let a few slide.  Undoubtedly however, the weirdest and biggest liberty is finishing on ‘Out Of Space’ where we’re treated to the prospect of a big show stopping ending, but as the music fades down for what we all anticipate as a a huge dynamic drop to finish on a high… a chorus of boos ring out and the sad realisation that the house lights are coming up signals the end.  A once raving crowd is now booing off the band!?  The boos felt tongue in cheek, almost a sign of anticipation waiting for the that dynamic, but we soon realise that that’s it and the mood changes from tongue in cheek to a little negative.  Both musically a strange ending and a really weird vibe to finish on!  With the ending and sound aside however, I don’t think many fans would have left disappointed tonight and there’s still people buzzing on the train journey home, although it’s unclear how chemically induced that may have been.