Brum’s sold-out O2 Academy is more akin to a grimy inner-city warehouse tonight as this rabid throng eagerly await the arrival of Braintree’s “Godfathers of Rave”. Frenzied is the only word to describe the atmosphere and the sweat factor is just immense – even my upper lip is dripping like a tap left on.

Just before 9.10, the house lights dim, pints and arms are raised and heavily dilated retinas are scorched by some serious blue strobes. I immediately fear for MC Maxim who hits the stage sporting a furry looking jacket. LAD. His bellows of “Birmingham I can’t fuckin’ hear ya!” are responded to in deafening fashion as the trio drop and tear into blistering opener ‘Breathe’. The entire venue is bouncing straight off the bat and the gleeful cries of “PSYCHO SOMATIC ADDICT INSANE!” are enough to render co-vocalist / mentalist Keith Flint inaudible. ‘Nasty’, ‘Omen’ and d’n’b tinged ‘Wild Frontier’ are rattled off in uber-quick succession, with material from current and sixth album The Day Is My Enemy packing enough beats and bass to titillate even the most jilted of generations. That said, it’s still the more old-skool flavours that seem to especially whet the punters proverbial appetites and the EDM behemoths send the place fucking berserk with ’96 cult banger ‘Firestarter’. Kudos to Mr Flint – twenty years on and he can still spit and snarl his way through those rhymes with menacing precision. 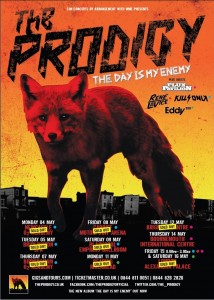 Whilst the opportunity to take a gulp of stale air between songs is slim, that’s not to say there’s zero time for banter with the fans. Okay, band talisman Liam Howlett might just prefer his spot behind those hallowed decks to the spotlight and Keith stalks about the stage like a man possessed to our collective delight but it’s Maxim who truly revels in the crowd’s appreciation. He is genuinely loving life up there and his repeated shouts of “All my fighters let’s go!” reach new heights as he makes a beeline for the packed floor during ‘Rokweiler’. His painted face is suddenly mere inches from my own (I’m torn between clammy ecstasy and professionalism here) and hundreds of smartphones are duly whipped out to capture the moment. If he’d remained in the same spot long enough for the iconic strains of synth-heavy stomper ‘Voodoo People’ to ring out, odds on he’d have lost more than just the mic in his hand. Sweltering bodies are hoisted on to buckling shoulders as we proceed to lose our shit en masse for the next three and a bit minutes. Fingers are pointing skyward, writhing shapes are being thrown on request (“where the fuck are mah voodoo people?”) and that bass thump is so heavy I feel like my insides are going to fall out. Never has the subsequent phrase “all my sweaty people here, this is the real fucking deal!” been so apt or spoken with so much conviction.

Any fleeting sense of respite after such unreal scenes is instantly obliterated with a pulverising salvo of ‘Get Your Fight On’, ‘Run With The Wolves’, and ‘Invaders Must Die’ – the latter of which has extra bounce and bite courtesy of the live percussion section. Holy mother, you just try and keep those feet still. Vitriol soaked ‘Wall Of Death’ translates much better in a live capacity with Flint’s barks of “Fuck you and your heart attack” sounding all the more scathing. An absolutely riotous rendition of infamous ‘Smack My Bitch Up’ (complete with a Slipknot a la Spit it Out “everyone get down on the floor” moment) rounds off the 80 minute set before the Midlands tribe show exactly how we represent during an encore comprised of ‘Their Law’ and ‘Take Me To The Hospital’. It’s all the ‘f’s – fun, filthy and ferocious. And as everybody in the place finally heads for the exit, there’s no denying The Prodigy’s infinite ability to light a fire under one’s arse. Welcome back lads – although on the strength of tonight’s gig, it’s like you never even left.