Almost nine years since their last full length outing (2012’s Days Go By) and six years in the making there’s a weight of expectation riding on The Offspring’s latest album Let The Bad Times Roll.

I must admit I was a tad worried when this promo dropped in my lap (musicians mature, people move on) but opening cut ‘This Is Not Utopia’ dissipated my fears and finds the band on top form. It’s everything I expected and more; distorted yet tuneful and with a pop sensibility (but not in the dirty sense of the world) it’s classic Offspring but with a modern twist. Rather laudably, the band have set an eye on the future and a desire not to stagnate. With a nice chuggy riff it bounces along at a frantic pace, like four horses racing towards the finish line it’s a high octane slab of pop-punk that arrives with all pistons pumping…and it’s only the first track!

For all their forward vision, the title track (and second single) recalls the band’s mid-career heyday. Discordant, but catchy as hell, it’s an earworm of the highest order that’ll burrow deep into your cranium on first play. I’m sure if it was released twenty years ago (when you’d go and buy a physical copy) it would have elbowed it’s way to the top of the national charts but, of course, we’re living in a different era. Having produced their previous two albums Bob Rock (Metallica, The Cult) hasn’t tinkered with the bands formula too much but he has created a sound that has a definite crossover appeal that’ll adhere equally to metalheads and hardcore kids whilst simultaneously pleasing the bands core fanbase.

Let The Bad Times Roll is a multifaceted album and it’s here where Bob Rock earns his money. From ska to skate punk via rebel rousing punk the band go on wild tangents yet still manage to sound like The Offspring. A prime example is the ode to middle age, ‘We Never Have Sex Anymore, a track that’s draped in jazz like horns. Some might say brass is the antithesis of punk but that’s exactly why they should be on here. It’s a track that displays the bands ever present sense of humour which also raises it’s head on the bastardisation of Edvard Grieg’s ‘In The Hall Of The Mountain King’, a cover that seems set to burn itself out on its own frenetic energy.

With sonic shifts aplenty this record is far from generic and many of these cuts are tailor made for the live environment and should go down a storm when the band hit the road later this year. One track that’s already had an airing is the 1997 single ‘Gone Away’ but here it’s stripped bare and features just Dexter Holland and a piano. With an oak aged voice Dexter brings out an emotion that was buried on the original and provides a nice change of pace which eases us into a thoughtful closer ‘Lullaby’. Both tracks stand in stark contrast to their predecessors and makes the silence that follows positively deafening.

Worth every second of the wait, Let The Bad Times Roll evidences a band not content to rest on their laurels and have used the lockdown to create a cathartic album that virtually fizzes with effervescence. Welcome back, guys! 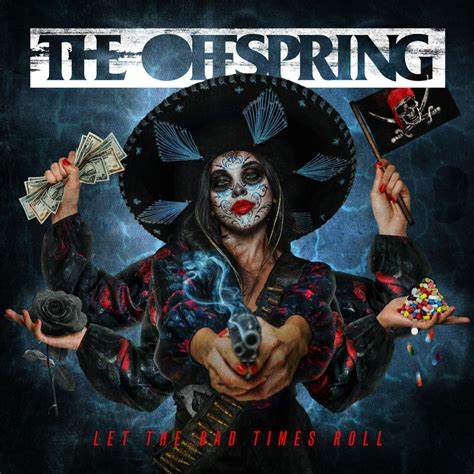