Sorry Mr. Bowie, but if ever an album should have been named ‘Let’s Dance’ it’s this one, the latest by Boston Ska-punks The Mighty Mighty BossToneS (nope, that’s not a typo, that’s how they like it being written). Great video huh, somewhat reflective lyrics, taking a look at the state of their nation, mention is made of a George whose breath was taken away – these ain’t easy themes. But the music. The music is upbeat, joyous even – it just makes you want to get up and dance. Badly. Like no-one’s watching. And then they take us to church, a gospel feel kicks in. Ska-punk-gospel, who knew that was a thing? But a thing it is, and a really rather great thing at that.

Believe it or not, the BossToneS have been around for nigh on 40 years! Founded in 1983, their latest album, ‘When God Was Great’ is their 11th studio album and their first for Hellcat Records. Produced by longtime collaborator Ted Hutt and legendary Rancid frontman Tim Armstrong, it feels like a summation,  the drawing of a line in the sand. The band are joined throughout by a rogues gallery of friends, touring buddies and guest musicians. Is it a culmination of their career so far or a fond farewell?

Opening track ‘Decide’ is a joy. We’re straight into the Ska – loose and lubricated, and lively. You’re instantly up on your feet, beaming. It’s good-time music, the band playing like a well-oiled machine…and why wouldn’t they, they’ve been doing this a while now. But dig a little deeper and you realise that all is not well. The lyrics refer to an old machine, it’s shot, not firing on all cylinders, it’s tyre’s are flat. Much has been compromised along the way, “values have been stripped…”

There is a wide seam of melancholy, of rueful reflection, running through this album. “Decide should we cash in or should we let it ride” bellow the band in the chorus. Who or what are they talking about? The Band? The Country? Who knows, it’s cryptic enough to not give the game away. Whichever it is, they’re dissatisfied about something. Still wanna dance though.

And on it goes. Even a casual glance at the lyrics tells you that something is up in BossToneS land. ‘I Don’t Believe In Anything’ is profoundly pessimistic. ‘Lonely Boy’ harks back nostalgically to discovering the sound of Kingston (Jamaica, not Surrey). Frontman Dickey Barrett considers buying a gun, something he’d never previously imagined. We’re living in a world with no moral compass, “the truth hurts”, neighbourhoods are falling apart, the rot has well and truly set in…from the top down.

But there’s also a weary defiance – “we might be bruised, but we’re not broken, we might be down, but we’re not out”. The world might be going to shit but we’ve still got a little bit of fight left in us, things were great back in the day and maybe, just maybe, we can claw our way back to that place – “turn up the volume, the system should be sound. Jump up get back and turn yourself around”. There’s a telling cover of John Fogerty’s ‘Long As I Can See The Light’, ok, they seem to be saying, we were the business not too long ago, we still have some moves, let’s get to work on that old engine and see if we can make it fly again.

And the music. The music is never less that celebratory. Never down or reflective, it’s a huge movable feast. It’s always party time. Everyones here, the guitars are cranked up, the horns are killer, everything’s dialled up to 11. There’s a lot of crankin’ and more than a smidgen of skankin’. There’s even a touch of pedal steel in there (country ska?). There’s lot’s of reggae, quite a bit of rock ‘n roll and Tim Armstrong’s woozy presence is in there quite a bit too. ‘When God Was Great’ has a lovely guitar intro and, with it’s rose tinted memories of growing up in the hood, it feels more than anything like a Ska-punk Springsteen!

We end with the 8 plus minutes of the prophetic ‘The Final Parade’. It’s a big old Irish wake of a thing, chock full of guest vocals – Jake Burns (Stiff Little Fingers), Jay Navarro (The Suicide Machines) and Aimee Interrupter, among others – which just grooves on and on. You can just imagine the party just warming up after the song fades out. But is it a goodbye?

“Sometimes dancin’ is all you’ve got” sings Barratt and that, ladies and germs, is what this album is all about. In fact, that’s what music is all about and the BossToneS are canny enough to know that. This album kills fascists, it’s a weapon, a tool. Yeah, we’ve got problems – life is brief, the clock is ticking, we’ve got pandemics, institutionalised corruption, right wing toddler leaders but we’ve also got music, we’ve got records like this which, while not avoiding the unpleasant truths, kind of allow us to forget about all the static, if only for a little while, and fucking dance all over them. And sometimes that’s enough. Let’s hope the BossToneS don’t dance off over the hill just yet.

Released by Hellcat Records on 7 May 2021 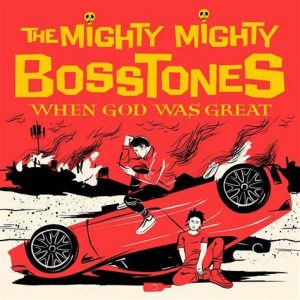