So, here we are, a year on from the release of ‘High Water I’ the, erm, first studio album by The Magpie Salute and, as promised at the time, here is ‘High Water II’. The Magpie Salute, for the uninitiated, are the notable alumni of The Black Crowes (Rich Robinson, Marc Ford, Sven Pipien) minus, due to some spectacularly bitter sibling rivalry and inter band squabbling, vocalist Chris Robinson, who went on to form The Chris Robinson Brotherhood (another dig at Rich?).

‘High Water II’ was written at the same time as part one and is definitely intended to be a companion piece or, in the words of Robinson, “a collective journey. I wanted ‘High Water I’ to introduce us to the world. With ‘High Water II’ I wanted to get a little deeper”. That’s as good a description of part II as any. It’s less immediate as ‘HWI’, there are fewer stand out tracks. The bands undisputed jamming pedigree informs this album – songs groove and hang out rather than hitting home with immediacy. If anything, it needs a few more accessible killer hits.

Having said that, opening track ‘Sooner Or Later’ (see above), fairly gallops out of the gate. It’s a slice of vintage Black Crowes – all loose yet wondrous guitar interplay and cool, gospely backing vocals. Vocalist John Hogg, while being great and soulful in his own right, steers slightly too close to the shores of Chris Robinson here – the sass, the vibe, the inflections – they’re all here. You can see why brother Chris refers to them (somewhat bitchily) as a ‘Black Crowes tribute band’.

But from here on in they find their groove. The thumping drums of Joe Magistro give several of the tracks an early Merseybeat feel while others (most notably lead single ‘In Here’) have a definite ‘Exile On Main Street’ sound, driven forwards by a fabulous horn section.

There is a lot of acoustic guitar herein too. ‘You And I’ flows calmly like the (*CLICHE ALERT) mighty Mississippi and ‘Mother Storm’, with it’s chilled vibes and brilliant fuzzed up Ford solo, is a definite stand out track. The Magpie Salute have always been a more relaxed, less wired proposition than the Black Crowes. But…do they lack that dangerous air of sibling rivalry that would take then higher? Discuss.

Speaking of stand out tracks, ‘Lost Boys’ is a doozie. A Tom Petty style country ballad featuring the fiddle and backing vocals of the wonderful Alison Krauss, it stands toe-to-toe with the best that Robinson/Ford have written – and that’s saying summat!

There is, however, the odd filler. Brilliantly executed filler…but filler nonetheless. ‘Life Is A Landslide’ grooves by anonymously while ‘Doesn’t Really Matter’ is basically ‘Black Moon Creeping’, from its uber funky riff to it’s swampy jam outro. The spare, spindly, airy ‘Where Is This Place’, however, closes proceedings in fine style, possibly pointing forwards to future directions?

‘High Water II’ is an album of solid Americana played by the very best. The band seem cool, chilled and happy with where and who they are. Yes, maybe they lack Chris’ mushroom-laced weirdness that helped make ‘Three Snakes And One Charm’ so…individual. We can only wait to see if these recent “Black Crowes to reform and tour in 2020” rumours come to anything and, if so, how they will affect The Magpie Salute as an ongoing concern, but for now, this is good stuff.

Released on 18 October 2019 by Provogue Records 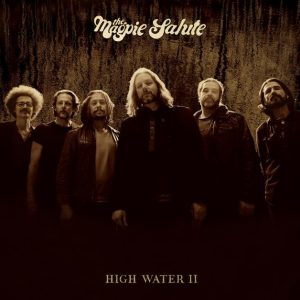