Ok, this is an interesting one. And fun. The band name for starters, sounds a bit Beatles-y, right? They were originally called Dr. Peppers Jaded Hearts Club Band and were assembled by band guitarist Jamie Davis to play a Beatles set at his wedding. It was, apparently, very good indeed. It led to  more sporadic gigs (the band already had day jobs), culminating in a slot at one of the Teenage Cancer gigs at the Albert Hall. Hell, Macca himself has jammed with them, tearing out a noisy version of Helter Skelter. The band always, always, wear black, and leather jackets are compulsory, à la Hamburg era Beatles (we’ll come back to them later).

So who are these guys you ask, and how does a covers band get so much attention. Well, if your bass player is Muse frontman Matt Bellamy and the rest of the band includes Blur’s Graham Coxon, Miles Kane (Last Shadow Puppets) and assorted members of Jet and the Zutons, you kinda get noticed. The band shortened their name and decided to record an album of Motown and R&B covers and lo, an Indie rock supergroup was born.

The album commences, surreally, with coastline sounds, the crackle of a needle placed on vinyl, a lone piano and Matt Bellamy singing a snippet of ‘We’ll Meet Again’…and then we’re off launching into a thunderous, technicolour reading of ‘Reach Out (I’ll Be There)’. It’s frankly huge, guitars are everywhere, the bass is fuzzed out to the max, there are choirs and enough focussed energy to power the National Grid.

And we stay at that full-tilt level throughout. Matt Bellamy, despite handling bass duties, rapidly pushes himself to the fore. Most of the tracks have an unmistakable Muse footprint stomped onto them, his bass throughout is immense, he definitely brings his guitar hero sensibilities to his four strings. The whole vibe is dirty, gnarly, cranked up to 11 but still respectful of the source material.

The above version of the Screamin’ Jay Hawkins track is a case in point. In a recent Guardian interview, Bellamy said: “I was surprised there isn’t a rock version out there”…erm, how about the Creedence Clearwater Revival version back in 1969, it sounds remarkably similar. Anyhoo, enough nit picking, this is a great version, harking back in sound and style to Muse’s classic take on ‘Feeling Good’. Bellamy is all over this album.

There are also several trips to the garage. ‘Nobody But Me’, with it’s slashing ultra-fuzz guitars, takes the original garage classic by the Human Beinz to Mars while ‘Money’ rocks out with abandon, Coxon and Davis locking in and revelling in beefing up that great proto-rock riff. Hamburg Beatles would have loved it (yes, we will get back to this).

We end with a fresh take on Peggy Lee’s ‘Fever’. It’s suitably minimal, just vocals, finger clicks and Bellamy’s huge acoustic bass, easing us to the finish line of what has to be one of the most enjoyable albums of 2020. I mean, who doesn’t love Motown with added filthy guitars?

Oh yeah, Hamburg era Beatles, I almost forgot. So, Muse and ‘Feeling Good’ were a touchstone for this album, but so, obviously, were those “loveable moptops”. Anyone remember ‘Backbeat’ a 1994 film about The Beatles and Stu Sutcliffe? Maybe, maybe not but it did have a killer soundtrack of rock ‘n roll hits that the Fab Four played in Hamburg, recorded by The Backbeat Band…consisting of Dave Grohl and various 90’s alt-rock luminaries from bands such as R.E.M, Soul Asylum, Afghan Whigs and Sonic Youth. It’s a great album, well worth tracking down and clearly an inspiration for The Jaded Hearts Club. The Backbeat soundtrack, however, was rough and ready, recorded live (and fast), whereas this is shot through with the ambition and ‘more is more’ ethos of Muse at their most bombastic, which is no bad thing. This album is purely and simply a very good thing. You need it in your life. Just don’t forget to play it loud.

Released on 2 October 2020 by Infectious Records 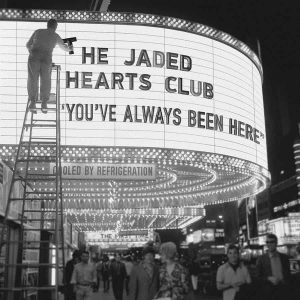