October 2020 will see Gascon duo The Inspector Cluzo release a live acoustic album The Organic Farmers Season – Unplugged Live 2020. Ahead of album release the band are set to launch a new single: Brothers In Ideals – Unplugged Live, which is also accompanied by an immersive live video.

The video was recorded on 12th February 2020 at Théâtre de Gascogne, Mont de Marsan, completely unplugged and live. With this new arrangement, the intimacy and the strength of the Brothers In Ideals, are reinforced by the violin and cellos, which seamlessly add another depth and another sonic layer to the track.

Brothers In Ideals – Unplugged Live 2020, offers a great initial look into the whole album. The Organic Farmers Season – Unplugged Live 2020, shines a new light on the band known for having their fingers in the electric socket. The album features the Neil Young cover My My, Hey Hey (Out of the Blue), alongside a host of The Inspector Cluzo classics. 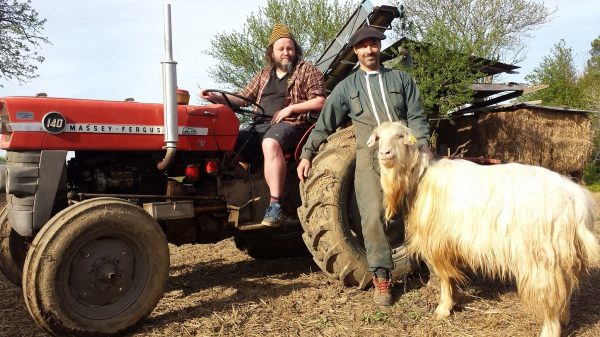 The album was produced by engineer/mixer/producer Vance Powell (Jack White, Seasick Steve, Raconteurs, Stapleton, Clutch) & the mastering engineer Pete Lyman (Chris Stapleton, Tom Waits…..) , two royalties in the world of warm and woody analogic, gave the best of themselves to the two Gascons. Motivated not by ambition, not by compassion: simply because these songs deserved this kind of unruly respect, this messed up elegance, this American instinct. For these acoustic songs to make so much noise, their discreet science of sound was critical. It allowed two Gascon boys to highjack the spirit of unplugged recordings and turn it into filtered mayhem, tamed but not domesticated. There is plenty to hear, within the gaps, in these versions

Full album track listing below:
A Man Outstanding In His Field
The sand Preacher
Cultural Misunderstanding
Ideologies – (first single / released 17th July 2020)
The Run
Lost In Translations
Lou Casse Theme
Fishermen
The Globalisation Blues
The Best
We The People Of the Soil
Hey Hey My My
Brothers In Ideals
No Deal At Crossroads
Little Girl And The Whistlin’ Train

In keeping with their reputation as one the most prolific touring bands in the world (The Inspector Cluzo have played over 1000 shows in 65 countries to date), the band completed sold out USA support tours with Clutch and Eels in 2019 alongside a host of festival appearances across the globe (including Lollapalooza Chile and Brazil) and a maiden US headline tour.

The Inspector Cluzo had a series of European festivals and supports slots booked for 2020 – including Ramblin’ Man Fair and supports to Clutch – that have now been postponed due to Covid 19. The festivals and gigs are looking to be rescheduled asap.