With the sonic tsunami and crowd delight still in the air from their high-profile festival successes at Steelhouse, Planet Rockstock, Rock and Blues and — most recently — Bloodstock, dynamic 4-piece Staffordshire, UK, hard rockers The Howling Tides today release their brand-new single and premiere its striking video.

The Howling Tides are made up of: Rob Baynes (lead vocals/guitar); Hayden Kirk (guitar/backing vocals); Adam Brewell (bass/backing vocals); and Steven ‘Herbie’ Herbert (drums). The rapid evolution of the band from their origins as a bunch of four rock-loving mates playing covers to an exciting, original UK hard rock band in their own right has been swift and impressive, and their trajectory leads firmly upwards.

In the words of Planet Rock Magazine, “The Howling Tides are a gimmick-free band who play muscular rock delivered with brute force.”

Their brand-new single ‘Thalia’ is a hard-hitting song, full of powerful, incisive lyrics, plenty of drive and no-holds-barred punch, with some razor-sharp guitar solos along the way. It’s a song built on a solid Blues Rock foundation with plenty of Punk energy and grit worked into the mortar, plus savvy lyrics with meaning and feeling

Explaining the single’s theme and message, the band say: “’Thalia’ is about being in a situation with someone who’s just playing your emotions, almost at will – a kind of poisoned dynamic where you’re almost powerless to stop yourself from being manipulated, again and again” 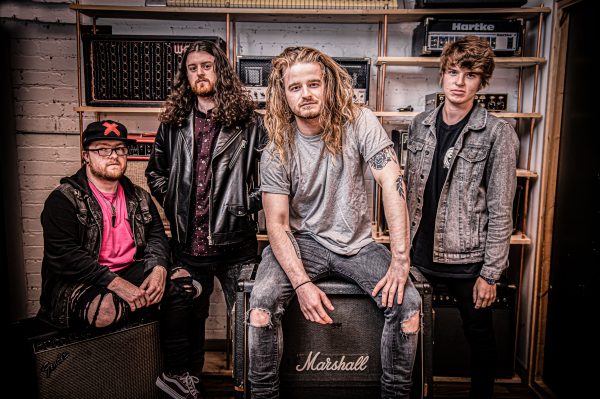 The performance video — by Loki Films — is full of energy, pace, light and shadow that perfectly fits the song and The Howling Tides’ vision: “We wanted a video that captured the inherent darkness behind the narrative of the song, expressed through visceral energy and pure aggression: there’s a danger to the feel that matches the vibe of the song perfectly.”

The Howling Tides have opened for Black Star Riders at the legendary Rock City in Nottingham. They’ve also ventured onto the Continent and played gigs in the Czech Republic, which the band felt marked a big milestone for them.

What’s more, The Howling Tides have been invited to join the mighty Ricky Warwick and The Fighting Hearts on their tour in 2022. This will be the ‘Tides first major UK tour and it signals that the band is starting to turn heads.

Ricky Warwick himself (lead singer of Black Star Riders and Thin Lizzy, and frontman of The Almighty and more) sings their praises: “The Howling Tides are one of those unique bands that when they come along remind us why we fell in love with rock ‘n’ roll, and why we still are.”

Maximum Volume Music echoes Ricky’s praise for The ‘Tides: “Recently, I’ve reviewed a few of the new breed of British Rock. Allow me to humbly suggest that this mob might be the best of the lot”

Thalia is now available to download or stream on all digital platforms https://snd.click/thehowlingtides

Check out ‘Thalia’ as proof of the band’s excellence and edge. The ‘Tides are definitely rising!