After reviewing a few fairly complex releases in other genres it’s always nice to come back to a good, meat ‘n potatoes stoner power trio, which is exactly what The Heavy Eyes are. This fuzz drenched three piece from Memphis have just released their third album and it’s a sight for sore eyes, or heavy eyes, or a sound for sore ears, you know what I mean!

I swear my jeans started flaring the moment I hit play. Stoned psyche vocals mingled with some very 70’s rhythm and blues riffery which in turn segued into a funky jam and a low slung, sleazy solo. ‘Saint’ has shades of Wolfmother and piles fuzz atop more fuzz, it’s soaked and aged in Memphis blues and has an earth cracking bassline.

The album seems to get increasingly heavy. ‘Z-Bo’ has a punishing, dark riff –  groovy AND trippy, it’s a bad trip but in a good way – Manson and his Laurel Canyon cronies would have dug this.

And so you sit back, chill out and lose yourself in it. There is everything you’d expect from a stoner album – nice L/R speaker separation, breakdowns and jams, grooves of laid back intent and riffs. Lots of riffs. Slinky, seedy, dare I say it, even slightly pervy riffs. Oh, and fuzz. I know I’ve mentioned Le Fuzze at least twice but there’s really no other word for it and they bring it in spades.

‘Hail To The King, Baby’ has molten riffs that shift into slightly different riffs in a firework display of Deep Purple-isms. Each band member is given their moment in the spotlight, or setting desert sunlight. ‘Smoke Signals’ is propelled forward by a thumping, tribal drumbeat of almost punk like simplicity and urgency while ‘The Fool’ is virtually an extended bass solo, wrapping you in its muzzy, distorted embrace until an FX-overdriven solo wafts in, sounding as though it was played underwater.

Ok, maybe some of the songs are a bit samey but, hey, it’s a good song! The album ends with the reappearance of the shaker that ushered it in but have patience, because there is a hidden track and it may well be the best thing on the entire album and a bit of a rarity – acoustic stoner! It’s heavy, bluesy and brilliant. Tambourines and foot stomps add to an almost John Lee Hooker tooth rattling shuffle. More of this next time please! But for now it’s the icing on a retro, rocking, hard grooving, amp abusing cake. 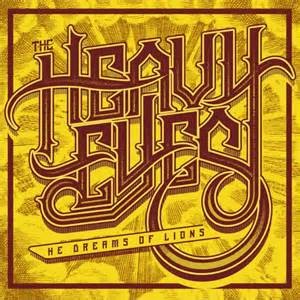 He Dreams Of Lions

Hail To The King, Baby