Best known as Gary Glitter’s backup band, the Glitter Band were amongst only a handful of backing bands to achieve independent chart success. They were formed from the ashes of the Boston Showband to play on Glitter’s hit singles between 1972 and 1973 and were originally called the Glittermen before changing their name to The Glitter Band in 1973. Shortly after it was suggested by John Rossall (Trombone and Musical Director) that they should record material without Glitter. This collection brings together their entire catalogue of single releases along with the accompanying B-sides all in chronological order across the first two CDs the second of which also contains rare tracks from the 80’s. On top of this on disc three you get the bands only concert release Live At The Marquee from 1986.

Between ’74 and ’76 the band had seven top twenty chart busters kicking of with their first hit ‘Angel Face’ which was a #4 smash and opens disc one. This is classic glam and is an introduction to their football terrace chant style. The B-side ‘You Wouldn’t Leave Me Would You?’ is very much a ‘Do You Wanna Touch?’ meets Wizard affair so typical 1970’s. The follow up sticks to the GB formula all hand claps and repeated chorus line and peaked at #10 in the UK with ‘I’m Celebrating’ written by drummer Pete Phipps on the flip side. A third top ten followed with ‘Let’s Get Together Again’/’Jukebox Queen’ (#’8) but this was to be blown out of the water by the bands biggest hit ‘Goodbye To Love’/’Got To Get Ready For Love’ which hit #2 at the beginning of 1975 and what a song it is. Things would never be quite this good again. With ”The Tears I Cried’/’Until Tomorrow’ hitting #8 and the Beach Boys inspired ‘Love In The Sun’/’I Can Hear Music’ only achieving #15 when ‘Alone Again’/’Watch The Show’ failed to make the top 50 the question must have been asked “is it all over for The Glitter Band’. HOWEVER they managed to silence critics when ‘People Like You And People Like Me’/Makes You Blind’ hit the charts and rose to #5. The new disco craze did also help B-side ‘Makes You Blind’ hit the dance charts when it was released as the A-side in the US (#4). Despite this when the band returned following Gary Glitter’s farewell tour and despite a name change to The G. Band what followed were a number of okay tunes which didn’t impress the audience now looking to disco and ballads by the likes of Chicago and Rod Stewart. The first disc of the set concludes with tracks which cover funk, soul and ballads in an attempt to rekindle their previous single success.

Disc 2 leads off where the previous collection left off with the final two tracks from the G. Band’s ‘She Was Alright’ E.P. ‘Almost America’ is the Glitter band at their least glitter and heaviest while ‘Love Street’ goes all funk with big guitar being replaced by big sax. After this the band split in two when Gazza returned to the concert halls meaning Gerry Shephard, John Springate and Pete Phipps recorded the  ‘Gotta Get A Message To You’/’Move On Up’ single under the Air Traffic Control moniker but this also unsurprisingly failed to reignite their fortunes. With glam cousins Slade becoming big news following their triumphant 1980 Reading Festival appearance The Glitter Band decided to end their four year hiatus the following year with ‘Until The Next Time’/’Spaces’. Returning to the classic Glitter Band sound this really was a song out of it’s natural environment. Moving to Cheapskate Records (the label founded by Jim Lea of Slade and his brother Frank) in 1982 for the ‘Heartbeat To Heartache’/’I Don’t Wanna See You Tonight’ they tried to rock it up again but their chart days were definitely numbered. The Glitter Band did however have one more failed attempt with their 1986 single ‘Nothing At All’/Backs Against The Wall’ but the aptly titled release made no impact. Completing disc two we have the new versions of ‘Angel Face’ recorded in 1989 which really bring nothing to this classic glam track along with six demos from the 80’s the best of which is ‘We’re Through’ which vocally could be pulled from an early Europe album and ‘T.V. Heroes’ with it’s heavy guitar/drum and the return of the hand clap.

The third disc finds the 1985 line up taking to the stage of London’s Marquee Club To rattle through the hits, album tracks and a selection of covers. ‘Rock N’ Roll (Part 2)’, ‘Angel Face’ and ‘Goodbye My Love’ are all here plus covers such as ‘Stay With Me Baby’, The Who’s ‘The Kids Are Alright’ and ‘Substitute’, Led Zep’s ‘Rock N Roll’ along with a number of lesser known GB tracks from across the years. This selection shows that the bands natural habitat was on stage and helps to see where they found their musical inspiration. A close run thing up against disc one (The Hits) for disc of the set.

If you are into your 70’s glam and glitter and don’t already own one of the many Best Of… sets this is an ideal place to start as it gives you “The Hits” and so much more. Various versions of the band still appear from time to time on the glam nostalgia circuit but this set lets you invite those heady days back into your home. You may wish to stick to discs 1 for best effect and don’t forget to raid your children/grandchildren’s art box for some glitter. Come On! Come On! 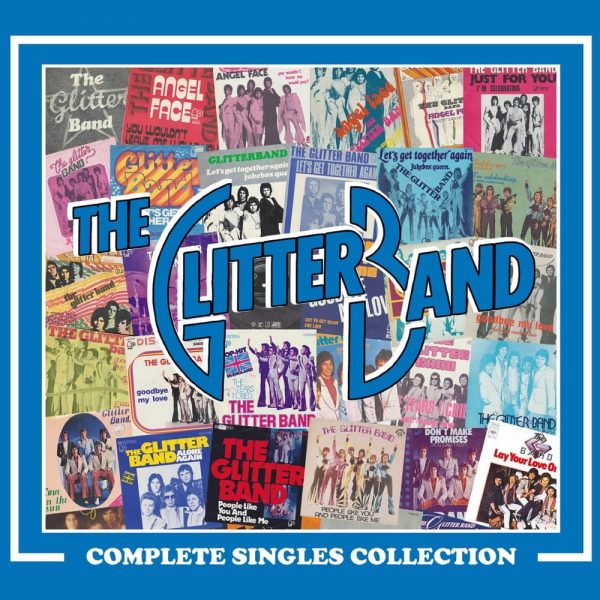 Disc Three: Live At The Marquee