Yee, and indeed haw, The Georgia Thunderbolts feel like the real thing. They’re from Georgia for a start, in the shadow of the Appalachians, so there’s that. Prime Southern rock real estate. There’s a lot of facial hair, and leather waistcoats…and guitars.

This youthful 5-piece grew up in the land of their forefathers, and can you ever hear it in these grooves! But there’s something more. Yeah, there’s authenticity in spades. There’s talent in abundance. There are riffs and choruses to die for. There’s grit, hunger. But there’s something else – something you can’t earn or learn, it’s just there. You either have it or you don’t, and the Thunderbolts have it.

This debut EP is a throwdown. The band have cut their teeth touring with the likes of Black Stone Cherry and Blackberry Smoke, now it’s their turn. These five tracks have the confidence and easy talent of a band in their prime. From the opening track we’re off and away, acoustic guitar and warm slide leading us into an Allman-like riff. It’s an instant earworm, Skynyrd (obviously) is in the mix too, as are The Stones, and by the time the chorus comes around a second time I’m humming along. They even say “thangs”.

And on it goes, full of Southern goodness. The drums are routinely huge and bombastic, the guitars crunch very nicely indeed and vocalist TJ Lyle, whether he likes it or not, channels the spirit of Ronnie Van Zant. Although it doesn’t feel forced or even deliberate, there’s just something there, something real.

‘Lend A Hand’ (see above) has a slightly funky groove and a mahoosive singalong chorus while ‘Spirit Of A Workin’ Man’ ups the riffage. These guys hit harder and heavier than the majority of their Southern counterparts, there’s a bit of Zep thump in there and there’s nowt better than the sound of 2 Les Pauls going hell-for-leather with reckless abandon…which you get here.

Which brings us to ‘Set Me Free’, which feels like it could become the Thunderbolts anthem. It eases into being. Lyle’s soulful vocals recall Paul Rogers (I told you he was good). The song itself also has a lot of that deceptively simple Free minimalism. It’s a mini Southern epic, hell, it even namechecks ‘Tuesday’s Gone’. After 7 glorious minutes it fades off down a long, hot freeway.

This is top drawer, old fashioned (though not retro), raw, impassioned rock. It’s bluesy, it’s Southern and it kicks a considerable amount of gluteus maximus. It’s twin guitar-Marshall stack-check shirt and sideburns rock and goddang roll. With a Marlboro hanging nonchalantly from it’s bottom lip and a groupie waiting behind the amps for the drum solo. The Georgia Thunderbolts are definitely a name to look out for. That debut album can’t come quickly enough… 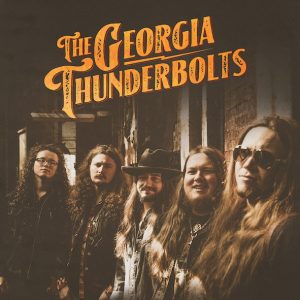