When I reviewed the debut EP by Southern 5-piece The Georgia Thunderbolts on here back in 2020 I was eagerly awaiting the release of their first album. And, finally, here it is, 13 tracks of down home goodness delivered by large men with abundant facial hair – and it’s every dang bit as good as I’d hoped…the album, that is, not the facial hair (although that’s pretty special too).

So, The Georgia Thunderbolts, hailing from Rome, erm, Georgia, in the foothills of the Appalachians. They come baring gifts of Gibson guitars, large Marshall stacks and muscular, no-nonsense Southern rock of the classic variety. As mentioned in my previous review, these guys are the real thing, as authentic (and heavy) as f***.

The album contains the entire 2020 EP, new tracks and a few choice covers, so let’s jump on in. Opening track ‘Take It Slow’, kind of does exactly that with this mid paced bruiser. From the first second, we’re rocking – a howl of harmonica and a roar of full-blooded guitar and we’re away. “well I pulled into a bar just South Of Ohio” drawls vocalist TJ Lyle and we’re off into a prime slab of bluesy, ballsy heavy Southern Rock. It’s a statement of intent – nasty guitars, raw. soulful vocals and blue collar attitude to spare. Creedence, The Stones, AC/DC, they’re all here and cranked up to 11.

And on we go with the thumping, funky, ‘Lend A Hand’. The pace drops a touch and a hint of Country is introduced with ‘So You Wanna Change The World’ – it’s very Skynyrd, and a dash of blues is never very far away. ‘Looking For An Old Friend’ is so Skynyrd it hurts, but in a good way, the Thunderbolts are no copyists, but this stuff is in their blood and every time you hear TJ sing you can’t help but think of Ronnie Van Zant, he’s that good.

Mid album and we get a brief covers segment and this, this is where the band show their Chutzpah. ‘Midnight Rider’, they cover ‘Midnight Rider’! It takes some balls for a fledgling Southern Rock band to tackle The Allman Brothers sacred text but the Thunderbolts nail it. It’s a Gibson/Marshall reading of the outlaw classic, bulked up and even containing a snippet of shred. They follow it up with a lively take on the Frankie Miller staple ‘Be Good To Yourself’ (recently played live and recorded by Thunder). it’s a great version and again, kudos for handling a Frankie Miller vocal! These guys aren’t afraid to slug it out with the big boys.

And on we go. We get more heavy blues, more heavy, twangy Country and a lot more gold standard Southern Rock. One album in and they can rightly stand tall against anyone (and I mean anyone) else in their field. This is as good as I’d hoped it would be, maybe even better. And this is their first album! How good, how gutsy and freewheeling, will album number two be? Let’s hope we don’t have to wait too long to find out. And if they get to play on a stage around here anytime soon, you’d be a fool to miss out. Highly Recommended.

Released by Mascot Records on 15 October 2021 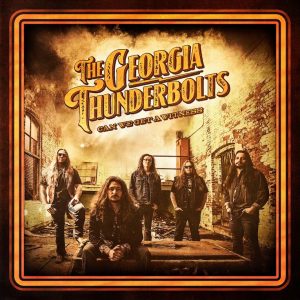