It’s not big and it’s not clever

Self released on 25 August 2017 and given the once over (sniggers) by Gary Cordwell….fucko!

The Fat Dukes Of Fuck. Yep, you read that right, that’s what they’re called. And rarely has such an accurate moniker been hung on a band.The quartet of gentlemen involved are resolutely of the portly variety (I’m sure they wouldn’t mind me saying this – after all, they named the band). And, apparently, they are Dukes of fuck. Juvenile, sweary, with humour of a decidedly frat DNA. Their vulgar, purile puns make ‘South Park’ look like ‘House Of Cards’.

The music too, fits in with their whole aesthetic (although the Dukes, I’m sure, wouldn’t claim to have an aesthetic, or even know what it is). Noisy, loud, grungy, alt, fuzzy and punky, it’s a feedback drenched smorgasbord of all the bands you’d expect – The Melvins, Jesus Lizard (David Yow even makes a vocal contribution), FNM, Sabbath, The Dead Kennedys…I could continue, but I won’t.

So far, so predictable. Your enjoyment of this will all come down to your tolerance of humour in music. It is, after all, a very subjective thing and one man’s ‘Mrs Browns Boys’ is another man’s ‘Seinfeld’. There are indeed dick gags here…lots of them. And if you don’t find the word ‘fuck’ intrinsically funny, well…you’re fucked. None of this is at all big. Or clever.

But then that’s the point. It’s not meant to be clever. And The Dukes don’t give a…y’know. That’s kind of why it wins you over. Despite their best efforts this album is never, at any point, offensive. These guys are too goofy and likeable. The puns are truly groan-worthy (‘Full Metal Jack Off’ anyone?). They swear, they play loud guitars, they drink lots of alcohol and they snigger at each other. But how much fun is that for other people to listen to?

It’s certainly a mixed bag…or should that be sac? There’s shred metal, ironic redneck cowpunk, NWOBHM, Primus stylee instrumental quirkiness (whoever ‘Tasteful Ray’ is, he belongs in the new series of Twin Peaks), spacey psyche, Napalm Death barrages and pretty much everything else in between.

Eventually though, the joke outstays its welcome. The songs begin to melt into each other and it starts to grate a tad. The potty-mouthed Mr.Bungle style metal diatribe of ‘The Monotonous Adventures Of A Hopeaholic’ proves, once and for all, that long songs and dick gags really don’t mix. The moral of this story is that you might not want to listen to an entire album made by dudes you’d really like to get drunk with. Sometimes slightly indulgent garage music is best left in the garage. As pleasant as it is to listen to this mash up of Tenacious D and The Butthole Surfers once, it may not bear up to repeated listens. “Making this album made a lot of our teenage dreams come true” said vocalist Brent Lynch of the album, “we hope there are at least a few assholes out there who will enjoy listening to it”. Well exactly. 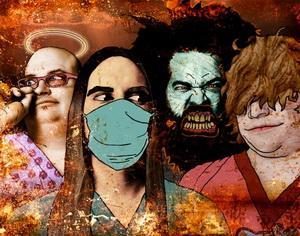