Arguably the first big rock release of 2021 comes courtesy of The Dead Daisies, a band who have had very much something of a rotating line-up since they debuted back in 2013. Holy Ground of course marks the first appearance in the Daisies ranks of the Black Country’s very own Glenn Hughes who joins here with Doug Aldrich, David Lowy and Deen Castronovo, albeit on the eve of the albums release it was confirmed that the drummer was to be replaced by Tommy Clufetos when touring eventually gets under way.

Leaving aside the various changes in personnel the Daisies have built a loyal fanbase and have a reputation as an explosive live act, something which can surely only be enhanced by having the muscular swagger of the Voice Of Rock at the helm. And with these new songs added into the mix the bands live debut will be well worth waiting for. Hitting the ground running with the title track it is clear that the Daisies are still very much a force to be reckoned with; the songs overflow with crunching riffs and ferocious grooves and are all topped off of course by Glenn’s impeccable delivery.

There is much here to admire and as the song suggests the Daisies have most definitely ‘Come Alive’ in this latest incarnation and the addition of the veteran bassist / vocalist has proven to be an inspired choice. The obligatory cover version comes by way of Humble Pie’s 1972 classic ’30 Days In The Hole’ and it is a real treat to hear this song dusted off and given the Daisies treatment. Given Glenn has such a distinctive voice it would be easy for Holy Ground to come across as a Hughes solo vehicle but they have avoided this trap with some terrific playing from Aldrich, Lowy and Castronovo. Much of what has gone before is up tempo hard rockers but it all calms down with the epic seven minute plus closer ‘Far Away’ that is one of those hugely satisfying closers that every great album deserves. A terrific record from start to finish. 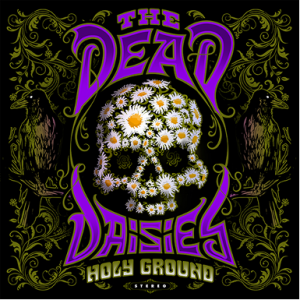