Could that video (and song) be any more 70’s? The public service broadcast snippets, the dodgy Hammer-esque horror vibe, the decor, the visual “effects”, the hair. Welcome, all, to ‘Eye To Eye’, the latest album from New Zealand retro rockers The Datsuns.

The Datsuns appeared in 2002 with their brilliant, eponymous debut album, riding that brief wave of heavier then normal indie rock (White Stripes, Jet etc.) But the Datsuns didn’t quite fit in. They were just a touch too heavy, they were wilder, rawer, and seemed to approach it all from a slightly different angle. It was fuzzier, more real. It felt like they meant it, like they were here to stay.

So, ‘Eye To Eye’ is album number 7 and, serendipitously, their first in 7 years, it feels like a concept album – an homage to those early 70’s space rock platters so beloved at the time. Persian rugs (the real thing and the rhyming slang), afghan coats, Michael Moorcock novels, 2001, and a somewhat stoned obsession with, y’know, whatever’s out there, man, it’s all in here. And as such it delivers in spades.

We blast off from the launch pad (see what I did there?) with ‘Dehumanise’. It’s “Mark II” Deep Purple encapsulated in 2 and a half minutes. Within seconds we’re into a wild guitar solo followed by a hefty slab ‘o Hammond and a Gillan-esque wail. It’s heavy, fuzzy and slightly proggy, topped by a squalling off-the-leash wah-wah solo. The Datsuns certainly haven’t mellowed in the intervening years since ‘Deep Sleep’, there’s still that feeling of abandon to the way they play, like it could all fall apart at any second, and make no mistake, that’s an art in itself.

And on it goes. There is a hefty dose of psyche to these songs. Occasionally you think it’s going to mellow out – acoustic guitars appear, but then we inevitably head back to the garage for a wig-out. The drums are never less than furious, barrelling the songs forward wildly. It’s all exceedingly retro – reminding you of something classic – y’know, that one with the RIFF – but it’s always slightly out of reach, you can never quite put your finger on what it is. Which is clever. But not archly clever, it’s not calculated, it’s just cool and affectionate.

There’s a lot of glam in the mix too, but grizzly, sleazy glam – Bolan but with the amps turned up too high. As already mentioned, Deep Purple is also a major touchstone, but it’s more far out, spacier, it’s Purple jamming with Hawkwind. ‘Moongazer’ is uber Bolan – complete with flower power backing vocals and much talk of “moonlight” and “velvet”. It’s a bruising fop, a quirky hippy hit with too many guitars. A hard rock ‘Hole In My Shoe’ if you will.

Brevity is also a thing. Nothing here quite reaches the 5 minute mark while at least four tracks don’t even top three minutes. Yet somehow several of these songs feel like potted proto-prog epics, containing, as they do, several ‘movements’ and, on ‘Suspicion’, crackling distortion and swirling keys lead us intro a groovy outro jam that feels much longer than it actually is – although, again, in a very good way.

This album, as short and sweet as it is, is a definite garage band homage to those hazy days of 1971. Although this garage band has some serious chops (and equipment). It’s all here, trippy lyrics, noodles, twin guitar frenzies, howling high-note wailing and lots of talk of other universes. Oh, and oodles of wah-wah. It’s great fun – big, dumb 70’s rock in excelsis. It’s ‘Starman’, ‘Space Truckin’, ‘Cosmic Dancer’ and ‘Silver Machine’ put in a big, loud, uninhibited blender and served with a frazzled smile. Crank it up and astral project to your hearts content. Man.

Released on 28 May on V2 Records 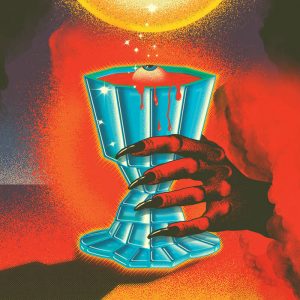