The Damned have rescheduled their UK tour to February 2022, plus announced all support acts for the shows including The Skids, The Wildhearts, Penetration, TV Smith & The Bored Teenagers and Smalltown Tigers.

THE DAMNED will play two nights at London’s Eventim Apollo, joined by Dunfermline’s finest punk rockers The Skids on 18th February, where they will celebrate the 45th anniversary of their historic debut album DAMNED DAMNED DAMNED. Newcastle’s The Wildhearts will join them for their second London show on 19th February.

Penetration, the band behind classic punk rock single ‘Don’t Dictate’, and TV Smith & The Bored Teenagers, who will perform Crossing the Red Sea with the Adverts, will each play a night in London and also play all regional dates. Italian trio Smalltown Tigers will play every show on the tour.

Ginger Wildheart of The Wildhearts says: “I’ve loved The Damned for a very long time – they are one of the few bands that the whole of The Wildhearts have in common. Our drummer Rich actually got the job because he liked The Damned and he’d been listening to them all the way up to the audition. It’s going to be brilliant and I’m so glad The Damned are doing these gigs as the original four members. Get yourself down there while we are all still breathing and making a noise.” 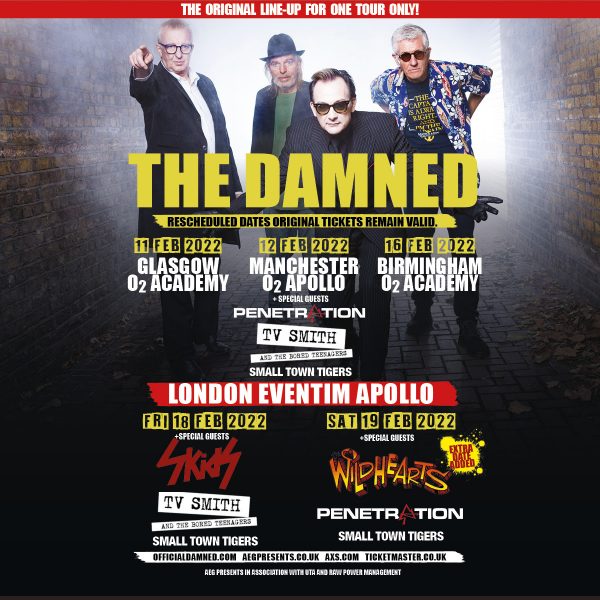