Indiana duo The Cold Stares return with their fifth album, ‘Heavy Shoes’. You’ll have noticed it’s a stripped-down, bluesy affair, a la The White Stripes, The Black Keys and many other three-word titled bands. There are hints of Royal Blood in there too (but not so much, Royal Blood don’t have ‘The’ in their name). So what differentiates The Cold Stares from the pack, you may wonder?

Heaviness probably. A bit less reliant upon strict blues and a bit more of a classic rock leaning. It’s heavy stuff indeed, both musically and thematically. It’s an album steeped in pain, in Southern Gothic gloom, in death, cancer, divorce and distrust, and some really gnarly riffs. Messrs Tapp (vox/guitar) and Mullins (drums) commence with the suitably, erm, heavy, ‘Heavy Shoes’ (see above) – fuzzy of riff and poundy of drum, it’s makes you sit up and take notice, and from here on in the foot rarely strays from the gas.

And there’s a lot more where that came from. Big riffs, a hefty dollop of fuzz, add some Bonham-esque drums and away we go. It’s loose yet precise, the riffs hit hard and the cumulative noise is punchy and surprisingly colossal for just two guys. Greasy riffs kick down the doors and then, somehow, proceed to get bigger, more menacing, more claustrophobic.

The more out-and-out blues stuff is gruffly convincing. Trapp knows what he’s talking about here, having been diagnosed with Stage Three cancer back in 2009, he’s eminently qualified to sing the blues. But there’s very little in the way of self pity, ‘Election Blues’ is a traditional shuffle with a dazzling twin-tracked guitar breakdown, it’s blues you can shake your hips to, while ‘Prosecution Blues’ is chock full of Chicago licks and fills – and a trippy solo that recalls Jerry Garcia at his most far out.

But there’s even more to ‘Heavy Shoes’ than that. There’s garage rock, there’s desert blues full of swirling winds and solos that skim the hilltops, there’s a hint of Soundgarden to a few of the riffs, there’s twang, oodles of echo and reverb and, in the case of ‘Save You from You’, there’s even a rather compelling blues/funk/doom mash up!

So yes, a resounding success. Bluesy and rocky with a dash of everything that lies in between (and quite a lot that exists outside of those twin poles). You never quite know what to expect but what you do know is that whatever it is, it’s gonna be heavy. The Cold Stares take that whole modern minimalist blues duo thing and give it a damn good working over. Whatever you’re into, this may well appeal – let’s hope they don’t go anywhere soon. Oh yeah, and check out the Day of The Dead cover art by Corey (Rick & Morty) Booth.

Released by Mascot Records on 13 August 2021 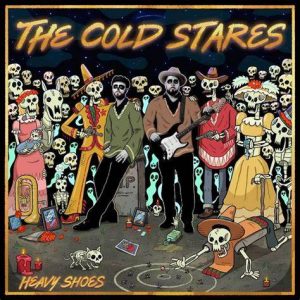