For some four years now three dudes from Nashville, Tennessee have been coming over to the UK and building a reputation as one of the hottest live tickets around. Jaren Johnston, Kelby Ray Caldwell and Neil Mason, aka The Cadillac Three, first took to a stage in Birmingham when they supported The Graveltones in the smallest room at The Institute. And by taking a leap of faith in the crowds over here and coming back every six months or so they are currently on their biggest headline tour to date with a sold out show at the Academy just one of many packed out venues. 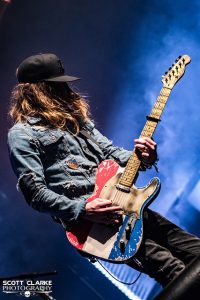 “We didn’t know what to expect when we first came over but it has been great” says Mason. “We were lucky early on to sell out London the first couple of times and see that the crowd were really into what we were doing and even though we weren’t going to make any money the shows were great fun to do.” With the added support and belief of Dante Bonutto and Spinefarm Records, TC3 could sense that the UK fans would prove loyal. “We could see the potential at that first show in London at the Barfly when the people were packed in and singing along with the words. And as Jaren keeps saying y’all keep coming back and we’ll keep coming back” says Caldwell. Johnston agrees, “ If it keeps going we’re going to keep coming back and someone said to us the other night so Arenas next and I thought they were joking at first and I then I was like “No Shit”. That would be really cool.” 2018 will definitely see more of the same as Caldwell confirms, “This has been a long run, we have three more shows but we’ve been gone for a month already so it’s a long time for us. It’s time to go home, we will definitely be touring and touring a lot next year but Jaren has a kid who’s going to start growing up and I’ve got a wife and she’s gonna want to see more of me I hope, so we do need to find the right balance for sure.” 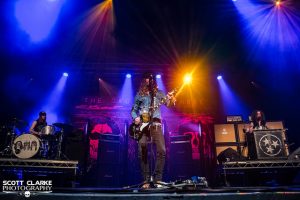 With the stage now configured to have both Mason and Caldwell on risers with Johnston front and centre the presentation may appear more polished but the band have lost none of their energy and passion for live performance. Kicking off with ‘Peace, Love and Dixie’ they deliver a near two hour show with a set list pretty evenly spread across their three albums to date. “We were talking about the set list the other day and ‘Tennessee Mojo’ is always in the set, an oldie but goodie. We want to play stuff of the new record obviously; but we have to make Jaren do it” laughs Caldwell. “I would like to play ‘This Accent’ off the last record because we’ve never played that once and with this record we have a lot of songs now so the shows are just getting longer, not Bruce length but we’re also not thirty, forty years into our career…and not that good, we don’t have a saxophone player yet” says Johnston. 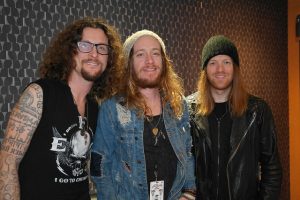 Current album Legacy came along just twelve months after Bury Me In My Boots and was a relatively swift follow up given the length of time between ‘Boots’ and 2012’s self-titled debut. As Caldwell explains “We kind of wanted to surprise everybody. It took forever to get the Boots album out and we didn’t want that to happen again. So we went into the studio as soon as we’d finished that one and started recording and decided well let’s get it out a year after the last one which we did when it came out in August.” Johnston continues “We had it finished in February and we always get really excited and we were like let’s put it out in April, June, July 4th…and it ended up being August because once you get the record to the company they need time to set it up and all that shit. But it worked out being around a year to the day. And it wasn’t just like we went in and cracked out a record, I think we wrote some really good songs and it shows our songwriting growth. I think it’s definitely the best record we’ve done so far and if I was looking at our band from the outside you can see where it’s going. So that’s pretty cool for three guys from Tennessee.” There was also a very original video that was used for ‘Demolition Man’ that anyone who has ever played video games will appreciate. Mason came up with the idea, “We wanted to do a bunch of videos right before the record came out but we didn’t really want to be in them. It’s not our favourite thing in the world to be shooting music videos we’d rather be writing songs or doing just about anything else really. So with all the videos we were intentionally trying to come up with creative ideas so that we would not necessarily have to be in them but we could still get the point across. So ‘Demolition Man’ when I thought about the lyric it was about the guy trying to get to the girl and I thought it was kind of like Mario Bros which we grew up playing when we were kids. And one of our Managers found this guy in Nashville who made 8-Bit video game looking videos and I thought it came out really well.” 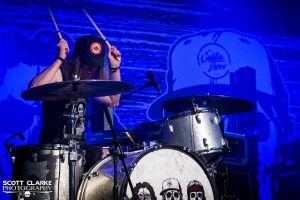 Legacy debuted inside the Top 20 of the UK album charts, TC3’s most successful outing to date and sing along anthems ‘Dang If We Didn’t’ and ‘Long Hair Don’t Care’ have quickly become live favourites. Once again, it was self-produced although the band has worked with in-demand Nashville producer Dave Cobb in the past. “We’re good friends with him and Dave is amazing but the thing is I think it might be extremely expected for a band like us to go and do a record with him after his work with Sturgill Simpson and Chris Stapleton and so on” explains Johnston. “And I think our record sounds really good. We are still learning that too, the craft of producing, so it’s fun for us to get in there and do that. And I’m not saying that we would never work with another producer and we were talking about Bob Rock recently, he’s and old friend of ours. And sometimes we think we’d love to go to Canada or Maui and make a crazy record but right now we tour so much we’re gonna go back in December and go and cut some songs, have fun with it and see where it goes.” 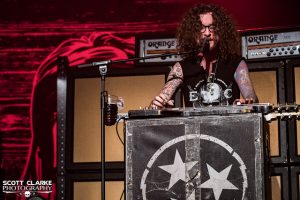 Sadly someone TC3 will not get the chance to collaborate with is Tom Petty, one of their heroes. Johnston: “It really hit hard. Honestly the three of us haven’t really sat down and talked about it because I think it’s just so shitty…and when that happened it was such a devastating day in America too with the Vegas shooting and that was just the icing on what was a terrible time. The bigger we get and the more people we got to meet I was like well surely we are gonna get to meet and hang with Tom sometime and then that happens. We would always say he was someone we would love to work with.” Mason: “It’s incredibly sad…I saw him on the last tour in Nashville and I’ve seen him a number of times and I thought it was the best time and they were all really playing like they gave a shit and it was really awesome to see and to hear. So it’s amazing they were able to go out on top playing the best that they possibly could. And the first time I heard him was on my Mum’s six-disc changer at our house and those songs are just as cool, fresh and relevant now as they were twenty years ago and as they were twenty years before that when he wrote them. And it’s reassuring to know that twenty, thirty, forty years from now people are still going to be listening to Tom Petty & The Heartbreakers.” 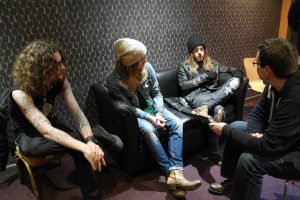 Looking around the audience in Birmingham it is evident that TC3 have a very unique and diverse appeal, something they are very much aware of. “The other night in Norwich there was a dude in front with a Download shirt on and next to him was an Eric Church shirt and someone else in a Jack Daniels shirt and a Hank Williams Jnr shirt and that kind of explains our band right there” says Johnston. This is a band that can tour with Florida Georgia Line or Luke Bryan over in the States and on this side of the Atlantic have become regulars on the festival scene. Mason: “We can fit anywhere we want, we’re not afraid to try different things. Those are opportunities that have come to us; they are not opportunities we are chasing down per se. When they are presented to us we look at it and say why they hell not. They’ve all been good in their own different and unique ways. Download was an immediate yes because it was a bucket list for us, we’d been hearing about that since we were kids and especially when they said we’d be supporting Aerosmith it was an absolute no brainer for us. So we’re doing a handful of shows with Luke and it will be great to get out in front of that crowd for us but equally if we got offered something random like Alice Cooper then we might go well hell lets go and try that. So you never know.” Back at home they cross the divide that can be apparent in Nashville as anyone who saw the recent CMA’s will know. “Sturgill sitting out in front of the theatre the other night was pretty hilarious. But Brothers Osborne is a good example, they’ve stuck to their guns and done their own thing and they are winning lots of awards. I also think Jason Isbell is making great records. The thing over there is that there is this unspoken battle between what Americana is and what Country is. And so I think some of these guys like Isbell are getting nods in the Country world but the Americana world doesn’t really acknowledge the Country side so there is this weird kind of thing. And then there’s us!” laughs Johnston.

TC3 are unquestionably a band that places equal measure on being both Southern and Rock; they can seamlessly move from the wistful ‘Running Red Lights’ (performed onstage by Johnston alone) and the heart-warming ‘White Lightning’ to whiskey fuelled anthems ‘I’m Southern’, ‘American Slang’ and signature song ‘The South’. But whilst they are very much open to trying new things Johnston reveals they don’t always accept. “We did the Florida Georgia Line and the Lynyrd Skynyrd cruises and we were offered Kid Rock’s cruise last year but we turned that one down. I wasn’t sure I liked the idea of being trapped on a boat with three thousand rednecks and they all know where my room is! So it was cool to do one time but I’m not sure we would do any more of those. Then again, maybe we could do our own European cruise one day; I don’t know if people from the UK and Germany would come along with us but it’s an idea for sure.”