Since forming in 2012 Bedford’s The Broadway Twisters have developed a reputation for their high octane, incendiary live shows. Having torn up stages in the capitol and blown away everyone from John Otway to Theatre of Hate we finally arrive at their debut long player South By South West 2. It’s a heady mix of swamp rock, garage-a-billy and country-trash that effortlessly transfers their live effervescence to wax.

Opening salvo ‘Night Tripper’ arrives with guitar blazing and it’s the perfect introduction to The Broadway Twisters. With a strong backbeat and an infectious groove, it’s the type of song that’ll snare you immediately. ‘Night Tripper’ captures the excitement of a Saturday evening; if you walked in a bar and stumbled upon the Twisters, you’d know you were in for a good night and when the guitar solo erupts mid song it’s suitably raucous. ‘Fender Car Disaster’ follows in a similar fashion with lyrics and music combining to create a real cinematic feel. Slightly off kilter, it reminds me of a John Waters film (Cry-Baby) and evokes images of hot rods, 1950’s diners and drive-ins. If ‘Fender Car Disaster’ doesn’t win you over then I suggest a new pair of ears.

Replete with handclaps ‘You Give Me Nothing’ passes through like a runaway freight train and there’s no sign of slowing down as ‘Girl With a Gretsch’ follows hot on its heels. Imagine Johnny Cash after imbibing mescaline, ‘Girl With a Gretsch’ is a rather surreal tale of Jesus and Satan on a night out (!) that’s swept forth by some powerful drumming and a nice twang on the guitar. Exploring the nihilistic cool of the infamous Japanese film director, ‘The Madness of Suzuki Seijun’ is perhaps the ultimate distillation of noir rock n’ roll, from the surf infused guitar to the slapped double bass to the locomotive drumming, it’s a riotous cornucopia of cool.

Guitarist and vocalist Adrian Stranik and bassist Bill Mann make up the core of The Broadway Twisters (with a succession of guest drummers on the album) and their sound is deeply rooted in classic rock n’ roll yet they also draw upon contemporary influences which gives South By South West 2 an air of refreshing originality. There’s also an understated English humour, a beatnik poetry, evident in a turn of phrase or quirky lyric, that tempers the Twisters nod to dark Americana. ‘L.V Hookers’ is bawdy and well up for it, like Gene Vincent circa 1956, while the addition of blues harp on ‘Probably North 10th Street’ is the kind of decision that elevates the Twisters above their peers.

‘Any Dope (Can Pull a Gun)’ is quick on the draw and pulls out all the stops with rapid fire riffs alternating with blistering solos. In an abrupt change of pace the dark and sinister ‘Crack, Baby’ is akin to stepping inside a smokey New Orleans opium den. Stark guitar lines juxtapose tinkering keys as Adrian’s oak aged voice floats atop whilst Bill leaves a tempting trail of notes. Punctuated by a series of electric shocks the band put their unique twist on a cover of Urban Voodoo Machine’s ‘Cheers for the Tears’ and ensures we depart as we arrived: in a blaze of guitars. 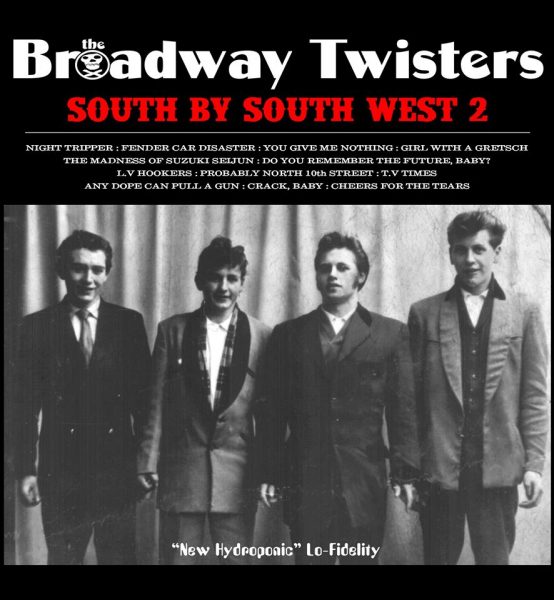