Having received glowing praise from the likes of Kerrang!, Metal Hammer and, of course, The Midlands Rocks, Brighton’s El Moono are a band very much on an upward trajectory. We caught up with the band just before they were to play their biggest gig of their career at this year’s ArcTanGent festival. Read on…

Can you give me a brief history of the band. What brought you all together?

Zac Jackson: We all went to university together. We started uni in 2016, and within a year I’d met Jamie at my birthday party,

Jamie Haas: We all became friends from our mutual love of Kelly Clarkson! That’s the main thing that drew us all together?

Do you all have similar musical tastes? Something you can all rock out to in the van?

Jamie: Kelly’s the big one, but anything weird and wonderful brings us together…and Deftones.

You hail from Brighton, which seems like a hotbed for alternative bands. What’s going on down there?

Harry Logan: There seems to be gigs on every night of the week so we’d always go out to watch bands, and if you see something you like you’d nick a bit of that.

Zac: There’s a thriving scene of subgenres mixing with other subgenres, and there’s this sub, sub, subgenre nest which is great. We love it.

Jamie: And that’s definitely why we do what we want as well. It’s the kind of place where people move to be themselves and people can be unapologetically yourself, and that really suits us because we strange. I really take pride in the fact that no one knows what genre we are.

You are a genre defying band, and you bring a lot of disparate influences into a cohesive whole. It could be an unlistenable stew if you don’t get the ingredients right. What’s your secret?

Zac: The best way to explain it is that we like big, heavy noisy stuff, and we just love different types of music, and we pinch an influence from here, and another from there. If it’s a nice space rock thing from Failure, we’ll imagine Failure mixed with a Meshuggah thing and hopefully we’ll get something that’s separate from either of those bands and is just us naturally.

Jamie: I think that’s true. Us as people gelling together is El Moono, and how it sounds is all our vibes crossing. We’re all open minded, and we never say no. That’s for sure.

Your latest EP, Temple Corrupted, has been out in the world for six months. Anything you’d like to go back and change?

Zac: For me, I think it’s difficult to be fully creative, and be content with your work. It’s just impossible. I know I am super proud of it, and I can’t wait to keep doing more and more, but I think we’re going to keep accelerating. I think it’s next to impossible to be completely in love with your own work.

Harry: I’d like to completely disagree with Zac. I think it’s the greatest EP ever made, until we make the next one! [laughs]

Jamie: When it first came out, I though this was the best thing we could ever do, how could we ever top it? But, now we’re working on what’s coming next, it’s almost like without that step we wouldn’t know where we are going next. That’s what is exciting us now; we wouldn’t change anything about it but we’ll use that as a stepping stone going forward.

If I was a musician, I don’t think I’d know when a song is finished, and when to walk way. How do you navigate that issue?

Jamie: If we had Sony Music budgets and millions of pounds floating about then I don’t think we’d ever finish. Sometimes you’ve got to have a person, and with us it’s Sam our producer, to say ‘Right guys, this is in a really good place. Lets mix it.’ And that’s really useful.

Chris: He knows where to draw the line, because it could easily go down a very deep rabbit hole.

I understand the EP was recorded in a disused church (hence the title). Is that correct?

Zac: Yes. It’s a studio called The Old Chapel, which is in Chichester. While we were recording there was something that just moved randomly, and there was an ongoing joke that there was a ghost there, and when anybody was being annoying and misplaced something, it was the ghost’s fault.

Jamie: It wasn’t derelict, but it would have been if the studio hadn’t been built in it. It was built in 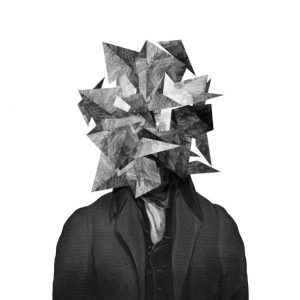 the shell of a church, and it was amazing because the live room was where you’d imagine the congregation to be sitting, and the control room was where the balcony would have been, and you could look down at Chris just slaying the drums. It was a beautiful, boomy church, and the vibes and tonality we got in there was amazing. It’s strange, the whole thing with Temple, we did a music video in a church, and we’ve done a few similar things. It feels like we keep ending up in churches. It’s also added to the theme, because when we finished recording we hadn’t thought of a name for the EP, and we kept going down these rabbit holes of ideas with being in a church. Social corruption and the church as an institution, and these big social ideas with these institutions being corrupted, but also our minds and our personal mental health being corrupted as well.

It’s a great sounding EP. It’s multi-layered and sounds as if it was recorded by more than four people. How do you plan on replicating that live on stage?

Zac: We all bring a live rawness, and I love the fact that it is different from the EP, but it also stays true in a unique way.

You are on stage at ArcTanGent today, and you have a run of club dates coming up soon. Do you approach the two differently?

Zac: ArcTanGent is bucket list stuff, and this is the biggest gig we’ve ever played. I am exhilarated. The club shows are also unique, they’re full sets, so you have to pace yourself. We’ll be going out with Joe Appleford which will be great, really looking forward to spending time with him, and it’ll be great chilling a growing with the band, so they’re both different experiences. However, today is a limelight experience, and we’ll be sharing it with so many people…

Jamie: …and ArcTanGent is part of our scene. This is home, this is the place to be for us. We’re walking around and we can’t get two feet without bumping into old friends, and that in itself puts you in a completely different mindset. But when we go on stage we put the same effort, passion and energy into playing. Just before coming here we played in Winchester, at The Railway, and Winchester is not the hive of weird rock music but playing to 50 people in that room is life-affirming to us.

Zac: That’s so true. I fractured my ankle in Hull…

Jamie: …he jumped off a monitor stack and fractured his ankle, and that show was amazing, and there were 90 to 100 people there, and there’ll probably be a 1,000 people here today, but that won’t make the Hull show any worse.

Do you feel that by having this raucous live show you’ve set an impossible bar for yourselves? I’s something that people will always expect?

Zac: I know, for me, that if I’m incredibly anxious, or having a tough time, I fuel that, and I don’t feel that’s going anytime soon. So, as soon as I’m in that state of mind, I’m there and in the moment.

Jamie: You’re absolutely right. I know when I’m on tour, and I’m absolutely knackered, and only had two hours sleep, I get on stage and suddenly the tiredness goes because all you are thinking about is playing a show and going bonkers. Your brain just switches to gig mode, and I think that’s testament to the zone we get in, and how much we love it.

Aside from the upcoming live dates, what are your future plans?

Jamie: We’ll be working on new music and we can’t wait to put music to tape.

Harry: It’ll be a continuation of what we’ve been doing, but also not. There’s the next step.

Temple Corrupted has had great reviews across the board. How do you plan to top it?

Zac: I’m assuming the guys feel the same, but we play what we play and we love what we do. So far what we’ve been working on is weirder than Temple Corrupted, and I’m so here for it.

Jamie: There’s one part that’s surf rock that segues into math rock, then back to the surf rock. I wonder what we were doing. At the same time, that song is our catchiest tune ever. It’s a cliché, but all the softer bits are softer and the louder bits louder, and we’re putting everything to the extreme on this one.

Finally, what are your hopes and aspirations for El Moono? How far do you think you can take it?

Jamie: We’re just taking each day as it comes. We all love each other, we’re all best mates and that’s the main thing; we have fun.

Zac: We do this for us, and the fact that other people enjoy it. It’s a godsend, it’s amazing, and an absolute privilege.