So, album number two from The Apocalypse Blues Revue comes with a mission statement of sorts, from drummer Shannon Larkin – “Our mission is to see if Apocalypse can reshape the shape of blues to come” – ambitious and portentous indeed, many have tried and failed. If Larkins name is ringing a bell, it should. He’s the drummer with Godsmack and, along with guitarist Tony Romula from said same band they formed Apocalypse with bassist Brian Carpenter and frontman Ray ‘Rafer John’ Cerbone. Troubador Cerbone has been around for many a year, making music, doing his thing, walking the earth, and has now, via a fluke meeting with Larkin, decided to join a band.

We’ll approach this album with two questions in mind: is it a good album and do they achieve their objective? To do this we’ll focus on the two longer tracks and give a brief overview of the others. ‘What A Way To Go’, is a slow, unhurried take on mortality (Cerbone, to be fair, is no spring chicken) and the big ‘what’s next’. It begins with some nice weirdness – chanty backing vocals, wind/air FX and spacey, treated, echoey vocals. So far, so atmospheric, Hawkwind does the blues. Then it gets a bit more traditional, a cool, lazy solo between the verses and more (much more) extended noodling taking us towards the outro. The solo seems to be deliberately long – no, don’t come around here yet Mr. Reaper Man, chill for a while, crack a cold one and maybe come back later. It finally ends with a nice blow out of the speakers. Cerbone sounds more then a little like a certain Mr. Morrison…this may not be the last time that this is mentioned.Hell, they even cover ‘When The Music’s Over’ as a bonus track on their debut album.

‘We Are One’ namechecks the album title and seems to encapsulate the bands approach. More trippy guitar FX and ohm chanting lead into some tasty psychedelic slide riffing. There’s a kind of minimalism to the music, it breathes, there are spaces between the notes. The vocals are mucho Morrison, in sound and content, “we believe the unknown” is purred at one point. Again it takes its time, stoned and happy where it is, man. We get a drawn out, Floydian solo from which we stumble into a nice new groove, taking us off into a ‘Roadhouse Blues’ kinda vibe replete with another guitar wig out. The Doors at their most bar band.

The rest of the album pretty much follows suit. There are a handful of influences which stay the course. Namely the oft mentioned Mr. Mojo Risin’, Dave Gilmour and Stevie Ray Vaughan. It’s all nicely dirty, there are occasional bongos in the background. ‘Hell To Pay’ is funky and loose while ‘Have You Heard’ is lightweight fun with heavy riffage. There are slow, tongue in cheek declarations of love and swaggering affirmations of joy – “I’m still smiling, I’m still here”. The ceremony ends with a 2 minute mood piece with almost spoken vocals amid trippy, bass led atmospherics which would have worked perfectly as a groovy outro to ‘What A Way To Go’. It burns out rather than fades away…or should that be the other way round?

So, a good album? Yes, emphatically yes. It’s great fun. The shape of blues to come? Possibly, if the future of blues to come involves time travel to Venice Beach in 1968, man. The songs all follow the traditional blues structures, the solos, while good, all namecheck 60’s/70’s icons and the vibe is resolutely hippy. Hooker ‘n Heat, Morrison and Stevie Ray Vaughan, wherever they may be, forming a biker blues band, you get the idea. “The apocalypse coming ain’t your daddies blues” affirms Cerbone…urm, it kind of is, but that doesn’t mean it ain’t good fun. Pretty good man, pretty neat. 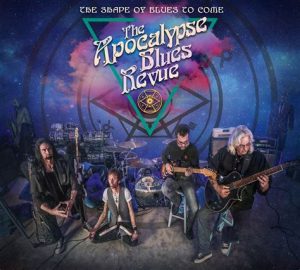