“Forgive me, father,” wails Cormac Neeson in confession before screaming out a pithy collection of lyrics full of open-hearted determination for what his future will bring on the title track from The Answer’s new album. With its mid-paced Sunset Boulevard first verse vibe soon giving way to crashing chords and heftily walloped drums, the title track’s a rowdy tune built for the rock club dance floor. As is the lesbian-loved-up video, shimmery guitar-rock of first single ‘Spectacular’ where the singer extends his belief that we should all similarly reach for the skies. New Horizon has Neeson singing from the pulpit, preaching and pleading in turn as each song’s direction dictates.

Since one of The Answer’s strengths is stretching out collectively to express themselves, making them more compact tends to work against the grain. Paul Mahon’s guitar is rarely allowed to crackles and fizz exuberantly, his solos kept to a minimum, and it’s only during them that Micky Waters really gets to zig-zag across his own four-string-fretboard. The exception to that is the sludgy doom of ‘Concrete’ that’s driven by a slow, deep, rumbling bass and builds to an emphatic metal onslaught, with great lyrics that appear to be about the effects of drugs but work as well as an analogy for on-going women problems. A killer track either way that could turn into an even bigger monster live. Their earlier Led Zeppelin-influences get to pass muster on the heavy blues of ‘Baby Kill Me’ can’t quite get that Houses of the Holy-era funk mix right on ‘Leave With Nothin’ but filter it in to good effect  during ‘Call Yourself a Friend’ one of the album’s highlights with its light and shade dynamics.

Less diverse than on previous records, the band brought in former Little Angels’ front-man Toby Jepson in as producer to fine tune them for mainstream rock radio airplay and the dance floor to maintain public awareness and keep them in business. To this end they occasionally appropriate a Hollywood sleaze sound akin to Guns ’n’ Roses or even The Cult, but more convincingly opt for an AC/DC style belt-out approach. Lyrically, it’s filtered with intelligent observations, clever asides and declarations; structurally, many of the songs rush to the hook then into the pre-chorus and then hit listeners hard with rhyming couplet chorus lines. Ultimately however, New Horizon feels a compromise for our times. On the plus it’s a fine taster for the great unwashed still unaware that for many, The Answer remain rock’s great white hope. 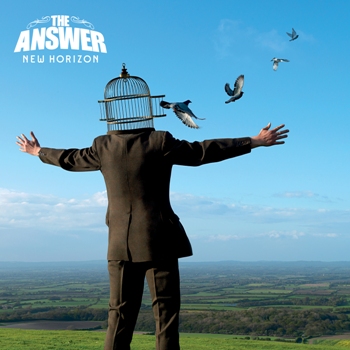