The Answer are set to make a spectacular and long-awaited return with their first new studio album in almost seven years and are thrilled to announce a series of very special limited UK and European album showcase performances in March and April 2023. 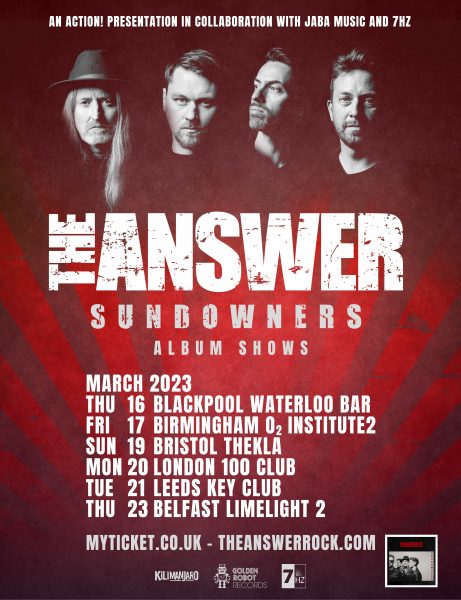 Says Neeson “We have been waiting to make this announcement for some time and are so excited to be able to perform once again at these UK and European album launch shows. It’s been almost 6 years since our last gig and you better believe we are both nervous and pumped at getting back in front of our fans with our new music. Look forward to seeing you down the front!”

Undeniably, The Answer have achieved a great deal in their career to be proud of. Emerging into the rock world spotlight in 2005, their debut single Keep Believin’ became the subject of critical acclaim and led The Answer to the ‘Best New Band’ award at that year’s Classic Rock Awards. The following year, the young band consolidated that early promise with ‘Rise’, a debut album that received universally great reviews went on to sell over 125,000 copies worldwide on the independent Albert Productions rock label, a startling debut achievement.

The ensuing years saw the band cement their fearsome reputation, both as an astonishing live band and as rock’s brightest hopes, securing high profile support slots with The Rolling Stones, Aerosmith, and a two-year stint on AC/DC’s 2008 Black Ice tour, which took them around the world and into some of the biggest venues on the planet.

With over 300,000 catalogue album sales under their belt and considered one of the forebearers of what is now colloquially known as the New Wave of Classic Rock, The Answer can’t wait to make this comeback after a long time away from the scene.