e early ‘90s The Almighty, like many of their peers, changed genres. It rarely worked out well but this Scottish quartet proved the exception and, by returning to their punk roots, The Almighty came through a confused time relatively unscathed and Welcome To Defiance: The Complete Recordings (1994-2001) documents some of that era’s very best music.

Biker rock at it’s very best, I was a big fan of The Almighty’s first two studio outings so when they went grunge for ‘93s Powertrippin’ then cut their hair (never a good sign) for ‘94s Crank I was naturally perplexed. Thankfully, my fears were unfounded; sure they sound like a different band but there’s an ever present energy that tethers them effortlessly to their past. Signifying a return to punk roots Crank came housed in a sleeve designed by Jamie Reid and the sound contained within was as equally raucous as evidenced by opener ‘Ultraviolent’. In keeping with the sonic shift there’s a distinct lack of solos and taking their place is a riff heavy, punchy sound with songs like ‘Wrench’ hitting particularly hard.

To be honest I think the punk angle was overplayed, ‘crossover’ would have been a better term with the band straddling the line dividing metal and punk much the way Motörhead did (and, like Lemmy, The Almighty have a sound that’ll appeal equally to punks, rockers and metal maniacs). Yet, that punk influence is ever present especially on The Ruts influenced ‘The Unreal Thing’ and the spiky, angular, cheap amphetamine blast that is ‘Crank And Deceit’. Like a mescaline addict who’s been awake for 7 days Crank is a totally wired, slightly paranoid effort containing 13 songs that are a bundles of nervous energy.

The bands second album recorded for Chrysalis Records Just Add Life finally saw the light of day via indie label Castle. Continuing in a similar vein to its predecessor it was more of that stripped bare rock but, if anything, it was a more sure footed effort and evidenced a band happy in their own skin and mining a unique groove. A tad less metal and a touch more punk Just Add Life really should have done better business but it barely dented the Top 40 despite containing some of their best work. That Ruts influence is still evident especially on opening shot ‘Ongoing And Total’ and the horn soaked ‘All Sussed Out’. Vocally too, Ricky Warwick sounds similar to Ruts warbler Malcolm Owen but it’s more in homage than any nefarious copycatting.

Musically this is tough-as-old-boots album that’s dominated by drummer Stump Monroe who seems determined to pound his kit into the studio floor. Like an unexpected visit from the drug squad The Almighty are knocking on your door and they’re not going away until you open up. However, there’s plenty of variety on offer with the crushing ‘Coalition Star’ and the fuzzed up ‘Look What Happened Tomorrow’ but it’s the all out rockers that the band do best and they’re here aplenty. Powered by a neat bass rumble ‘360’ has a sweet twist in the tail and don’t blink or you’ll miss the blast that is ‘Afraid Of Flying’ which segues into closer ‘Independent Deterrent’.

Mid-career eponymously titled albums are usually used to signify a rebirth and that’s certainly the case with The Almighty. After disbanding for several years the core trio of The Almighty (now supplemented by guitarist Nick Parsons) reformed for the new millennium and found the group tighter and delivering the same brand of hard hitting rock, only this album sounds more detailed and textured than Crank and Just Add Life. As an old school metalhead I miss the extended guitar soloing from days of yore but the twin team of Warwick and Parsons combine to create a humongous sound that more than compensates for any lack of noodling.

In line with their previous releases The Almighty finds the band evolving and adding new colours to their palette. ‘Broken Machine’ is the strong opener and arrives with the force of a rockfall as the guitars riff in tandem to create a real bruiser. There’s a strong focus on song structure here that renders a track like ‘Big Black Automatic’ potential hit single material (if Joe Jackson had played metal…). The addition of Parson’s seems to have revitalised The Almighty, he shares a fair amount of songwriting credits and his influence seems to have applied a little restraint. Fans of their rowdy side needn’t worry as there’s plenty of rock action from the explosive ‘TNT’ to the punky ‘Barfly’ while ‘Misery Guts’ ensures the band depart as they arrived.

Wasting little time Psycho-Narco followed hot on the heels of The Almighty yet despite the months that separate them they sound markedly different. Psycho-Narco is an angry album which has rage jumping out from its grooves. “I grew up in a small town, dreaming of how to burn it down” sings Ricky by way of introduction on ‘Galvanize’ and things detonate from there on. Who knows why they’re peeved but, whatever, the result is an album that comes out with both fists swinging. As is often the way new bassist Gav Gray has injected a dose of freshness and energy and, as a result, tracks such as ‘Soul On A Roll’ and ‘Hated’ drip with attitude.

Psycho-Narco is more of that punky-metal hybrid with ‘Big Idea Idiot’ sounding like The Offspring jamming with Slayer; a strange mash up but somehow The Almighty make it work. A buffalo stamped is ‘Witness Relocation Programme’ which is peppered with some savvy lyricism while closer ‘Million Times Nothing’ is the musical equivalent of a pistol backfiring and, in retrospect, provided an apt conclusion to the bands studio output. Rather confusingly (and with no discernable drop in quality) The Almighty’s chart placings decreased with each successive album and Psycho-Narco barely limped into the Top 200 and, in the face of an uncaring public, they defiantly called it a day.

In whatever guise The Almighty appeared they always put on a killer show, whether it was supporting Alice Cooper in the stadiums, playing for the Hells Angels at the Bulldog Bash or rocking Osaka’s IMP Hall. Recorded at the latter on 16th July 1995 Crank And Deceit – Live In Japan finds the guys on top form. A stereotypically reserved Japanese audience go suitably nuts for opener ‘Jonestown Mind’ and things stay on high alert for the next 70 minutes. Touring the Crank album this set is culled from that record (11 of the 17 tracks) but they find time to preview ‘360’ and revisit a few classics such as ‘Wild And Wonderful’ and ‘Addiction’ (although ‘Full Force Lovin’ Machine’ is criminally omitted). Wild and wonderful indeed.

There was something about The Almighty’s brand of rock that lent itself well to being remixed and two re-workings of ‘Jonestown Mind’ open B-Sides And Remixes. Firstly, Therapy? get spacious before The Ruts drape the track in post-punk and industrial leanings. Perhaps attesting to their punk roots it seemed that the single was the bands natural habitat and, by extension, expended a lot of effort on their B-Sides. Two cover versions stand out: an uptempo version of Eddie And The Hot Rods ‘Do Anything You Wanna Do’ and an equally vivacious reading of G.B.H.’s ‘Give Me Fire’. Flip sides they may be but B-Sides And Remixes is of strong enough quality to make a stand alone album.

The final disc opens with a set recorded in Stuttgart in 1994. It’s a raw and visceral 7 song outing that draws heavily from the Crank album and finds the quintet in top gear, both gnarled and grizzly. I actually prefer this live set to that from Osaka as The Almighty turn a solid performance that adds extra fuel to ‘Move Right In’ and ‘Sorry For Nothing’. Two tracks from the Osaka gig were used as contemporary B-Sides and close out Live B-Sides & Sessions in fine style: an extended version of ‘Jesus Loves You’ and, rather fittingly, a raucous rendition of ‘I Fought The Law’ (which, thankfully, is more Clash than Bobby Fuller). 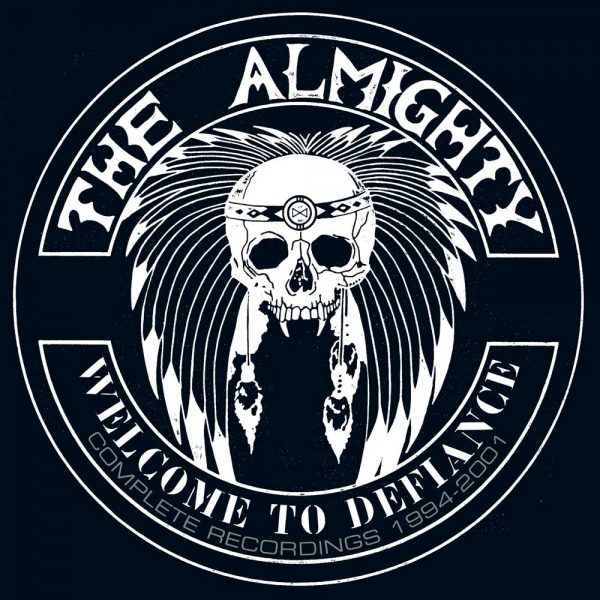