“We were on tour in Germany opening for Iron Maiden when Powertrippin’ crashed into the UK National Chart at #5. The Maiden boys held a party for us that night in their hotel to celebrate. We suddenly felt very validated, looking back I think we were “

Although initially inspired by punk, when Scottish school friends Stump Monroe (drums), Floyd London (bass) and Ricky Warwick (guitar, vocals) joined forces with guitarist Tantrum in 1988, they chose a harder rocking, heavy metal sound. Snapped up by Polydor Records for 1989 debut “Blood, Fire & Love”, their more punk infused aggressive approach was a welcome relief from the glam orientated sounds imported from across the Atlantic. This was followed by “Soul Destruction” in 1991, and then “Powertrippin’” in 1993. 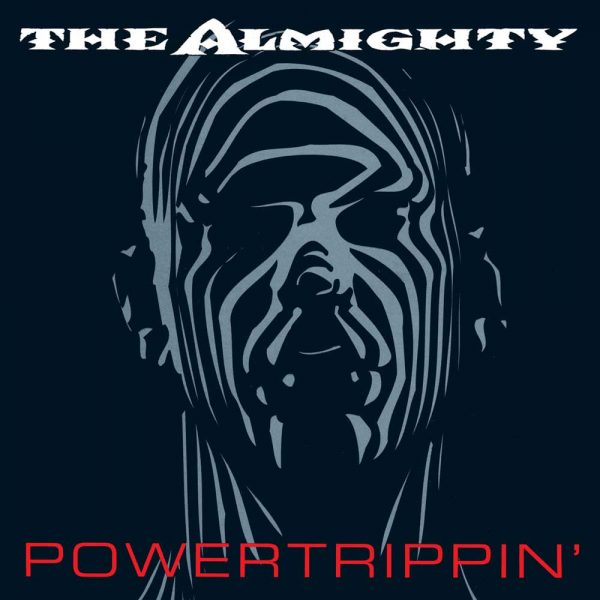 The Almighty demonstrated that British hard rock had plenty to offer at the beginning of the decade, and in 1991 The Almighty were special guests of Megadeth, a tour where Alice In Chains were the opening act. This tour highlighted which way the wind was blowing, away from hairspray bands in favour of something grungier from the Pacific Northwest of America. “Powertrippin’” was also the first album to feature guitarist Pete Friesen, replacing original member, Tantrum.

As well as the singles ‘Addiction’, ‘Over The Edge’ and ‘Out Of Season’, this expanded, deluxe reissue of “Powertrippin’” includes the B-Sides ‘Blind’, ‘Bodies’ (originally by the Sex Pistols), ‘Insomnia’, ‘In A Rut’ (originally by The Ruts) and ‘Fuckin’ Up’ (originally by Neil Young and Crazy Horse). Live versions of ‘Takin’ Hold’, ‘Jesus Loves You…But I Don’t’ and “Powertrippin’” illustrate what a powerful band The Almighty have always been on stage. The bonus disc also includes demo versions of ‘Free ‘N’ Easy’ and the title track from Soul Destruction: which was never officially recorded or appeared on the final album. Plus there’s even time for an acoustic take of Neil Young’s ‘Rockin’ In The Free World’!

This release features a fully illustrated booklet, complete with detailed liner notes from Malcolm Dome based on interviews with the band.