“The times they are a’ changing”

Who knew Bob wrote this about Ricky Warwick and co.? It’s 1991 and The Almighty – a band in the ascendant, having already released 2 fine albums – find themselves on tour with Megadeth and another band of fresh-faced hopefuls…Alice In Chains. AIC’s music was different, devoid of hairspray and spandex – it was dirtier, downtuned and, dare I say…grungier. And ‘the kids’ seemed to dig it.

It struck a chord with Warwick, who sensed a change in the air. Now, The Almighty were never a hair metal band. They were as rock as a very stony, granite-like thing. They were low slung guitars, big riffs, biker chic. They were Thin Lizzy and the Sex Pistols rolled up in one two-fisted, heavily tattooed package, but they liked AIC – the anti-showbiz, the check shirts, the attitude and those grubby, sludgy riffs. Warwick knew his band could go further.

Also, with prescient timing, original guitarist Tantrum left the band, to be replaced by former Alice Cooper guitarist Pete Friesen, who was also enamoured of drop D tunings. It was a match made in heaven (with one eye on Seattle).

And so the band decamped to the studio and set about recording their third full-length album, the career-high ‘Powertrippin’, now the subject of a deluxe 2-disc reissue by those fine people at Cherry Red, and what a joy it is to reacquaint yourself with this great album.

Most Almighty fans will already have this is their collections and it’s as good as you remember, maybe even better. The production, courtesy of Mark Dodson (Judas Priest, Suicidal Tendencies) is brilliant – crystal clear and full-bodied, while the band are playing better than they ever had, energised by their new sound and guitarist. Everything seemed to fall into place at the right time.

The album is full to bursting with killer riffs – bruising, propulsive, and heavier than anything they’d previously given us. It was The Almighty you always hoped they’d be. ‘Possession’ hits near thrash levels of speed, driven forwards by truly thunderous drumming (take a bow Stumpy). The title track is pure Motorhead, from the Phil Taylor-esque kick drumming to the frantic, speed crazed momentum, it’s gloriously frantic.

And it’s not all just punk metal belligerence. ‘Out Of Season’ is aided by acoustic touches and resembles the heavy Americana that Warwick would explore later in his career while hit single ‘Jesus Loves You…But I Don’t’ is a track Warwick is still justifiably proud of. From it’s acoustic intro it blasts off into some chrome-plated Steve Jones-alike roaring powerchords. Yes, it’s slickly produced and grunge inspired, but they still hadn’t lost ‘the bollocks’. Oh yeah, Blaze Bayley (Wolfsbane) is on backing vocals too, and who knew James Taylor (of Acid Jazz dudes The James Taylor Quartet) played keys throughout?

So yes, a good, solid album. It’s absolutely still The Almighty – just a tad heavier. It looks to the future but isn’t beholden to it – what they saw coming just gave them the freedom to go where they wanted to go and, in hindsight, it also sonically resembles Metallica’s ‘Black Album’. And things got heavier again with Warwick’s personal favourite Almighty release, 1994’s ‘Crank’.

We also get a second disc of bonus tracks. There are raging live versions of several ‘Powertrippin’ tracks which manage to top their studio counterparts for sheer attack and commitment. There are also some interesting demo’s (including ‘Soul Destruction’ and ‘Wild And Wonderful’) as well as some tasty B-sides and radio edits. The band’s choice of cover versions to be used as B-sides are also very telling – Neil Young (at that time easing into his ‘Godfather of Grunge’ mantle) was clearly a fave – we get an acoustic ‘Rockin In The Free World’ and a feedback-heavy ‘Fuckin’ Up’ while their punk roots had certainly not been abandoned – represented by fierce run throughs of Sex Pistols and Ruts classics. All in all this is a great release, well packaged and put together with great photos from the time and an informative booklet (written by Kerrang’s Malcolm Dome) so, even if you have the original, you need this reissue. 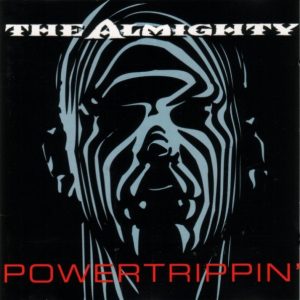