Southern Rock is big business these days. It seems more popular than ever. Multiple guitars locking in to extended solos, much facial hair, backward turned, oil stained baseball caps and lots of songs about “home”, wherever that might be. It’s stock is high, the confederate flag seems to be borne aloft by more bands than ever, and the majority of them aren’t even from the South…well, not the American South, anyhow.

So, I hear you cry, how do we know which of this plethora, this smorgasbord, this Graceland of bands are any good? Well, listening to them is a good first step but sometimes, just sometimes, you can take quality as a given. Some Southern bands become great well some are born to greatness. Exhibit one: The Allman Betts Band.

This 7-piece band is led by Devon Allman (son of Gregg) and Duane (yep, named after you-know-who) Betts (son of Dickie). We also have Berry Duane (there’s a theme emerging here) Oakley, son of, erm Berry Oakley, on bass. So, as with all the great Southern bands, it’s a family thang.

‘Bless Your Heart’ is album number two and sees the band, who hadn’t played together before recording their debut album, bedding down, loosening up and showing the world what they can really do now they’ve had time to get to know each other. The result is an album for the ages.

For starters, it’s long. 13 songs running at just over 70 minutes, so pretty much a double, which, for my money, is usually a good thing. An indication that the band are enjoying playing together, being productive, nay prolific. Usually doubles are eclectic, loose, occasionally a bit weird, and chock full of good stuff that you wouldn’t find on a trimmed, cherry-picked single album.

Which proves to be the case here. Proceedings commence with ‘Pale Horse Rider’, a mid-pace slice of heavy Americana. The band crash in, it’s a full, big, cinemascope sound, conjuring images of forests, canyons, wide open plains. And, before you know it, there’s that twin lead Allman Bros. guitar sound, as comfortable as a favourite blanket…but rawer, heavier, more urgent. Right out of the gate the band are starting to stretch out, it’s classic Allmans, but contemporary too, reminiscent of My Morning Jacket and Lord Huron.

The first few songs stick to the same blueprint. Heavy Southern Rock, The Allmans as played by Crazy Horse. The sound is nicely greasy. The vocals are hairy and soulful, the keys and backing vocals add colour and history. The three (count ’em) lead guitars swoop and dive, the slide soaring above it all on balmy gulf streams. Horns appear, brilliant sax work helps the grooves to flow flawlessly.

And then we begin to explore. ‘Ashes Of My Lovers’ brings a considerable amount of twang and lends a spaghetti Western feel to things. It’s timeless stuff, brimming with well-earned confidence. These guys aren’t hanging on anyone’s coat-tails. ‘Southern Rain’ is slower – chilled and moody, although it appears to end with a massed choir of guitars it doesn’t bludgeon, it keens and sings.

Most Southern states manage to get a namecheck in here somewhere too, from Tucson to San Antonio, Texas to Santa Fe. Country is a major influence (obvs). You almost grow a handlebar moustache just from listening to the acoustic tracks – they’re light, sunny, carefree, leaving you wanting an endless sun-baked road to burn down in a convertible. ‘Magnolia Road’ (see above) in particular is an instant top-down radio hit, a West Coast feelgood instant classic full of clever little Allman references.

But this album also bears it’s claws. It rocks. Amps crackle and the band are counted off into some big bloomin riffs. There’s pounding swamp boogie, barroom piano and ‘Should We Ever Part’, in particular, burns serious amounts of rubber. It’s perfectly unpolished, Allman roars like a madman while the band push everything into the red. The gnarly guitars scorch the earth, overdosed with distortion almost to the point of breakdown.

There are longer songs too. The band channel their inner Floyd for the eight minutes of ‘The Doctors Daughter’. It has a soporific, ethereal feel – the band tune in and drop out, serving up a trippy dose of Gilmour-esque guitar before easing into some psychedelic flamenco. It seems to go on for weeks, but in a good way.

And then there’s ‘Savannah’s Dream’ – a 12 minute instrumental in grand Allman ‘Elizabeth Reed’ tradition. Suffice to say it’s a treat for the ears, full of trademark ABB licks and flourishes without aping in any way. It’s a triumph – jazzy, relaxed and crammed with interplay as good as you’d expect from a band with this lineage. Each member is given space to launch into their own solo and the gradually building intensity pretty much matches the Derek Trucks/ Warren Haynes duels from latter day Allman gigs…and that’s saying something. Just sit back and let it wash over you and wonder about just how long this will go on for once they get to play it live!

We end on a relaxed note with more piano-led acoustic fare. The sky is bruising, a fire has been lit and beers are being cracked open. Let’s just sit back and watch that big old sun set. The Allman Betts band have more than earned their stripes and kept up with their dads. This is a fine Southern Rock album that sits comfortably up there with any of the best from it’s genre. Who knows where they’ll go from here but a lot of folk will be on board for the ride. 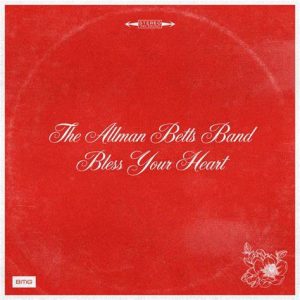