Review by By Paul H Birch

Alan Parsons’ work at Abbey Road Studios, notably with The Beatles and Pink Floyd, attest to him being an integral participant during the rise in hi-fidelity sound’s production. Today’s music listeners  downloading free music over their sundry remote devices cannot contemplate the leaps and bounds in technology that were affecting how everyday folk listened back then nor the kind of music that could suddenly be achieved (not necessarily good, but certainly different) because of his refined quality.

Respect where it’s due in Parsons’ case, he subsequently chose to pursue the concept album creatively, partnering with Eric Woolfson primarily as songwriters and utilising Parsons’ production skills under the moniker of The Alan Parsons Project. They were aided and abetted at various stages of their collaborative career by skilled sessioners notably members of UK pop charters Pilot and their US equivalent Ambrosia, alongside guest vocalists like Stretch’s Elmer Gantry and former Zombie Colin Blunstone.

Tales of Mystery And Imagination features John Miles and Arthur Brown among its notable vocalists. Ironically the most iconic voice that was due to be featured on the record wasn’t heard until its 1987 remix. This matter was further convoluted for this particular listener as on opening the copies for review Disc 2 was placed in Disc 1’s sleeve and it was played initially without being aware. It is unfortunate for the original comes off the poorer relation. Orson Welles’ voice on the remixed version takes things go up several notches, adding atmosphere and helping define the times it was made even more for those of us who lived through that period.

For those who come late, Welles is the dramatic voice that startled US radio listeners with his adaptation of H.G. Wells’ War of the Worlds in 1938, and the auteur behind Citizen Kane, hailed as one of the greatest movies of all time. To heavy metal fans he’s the voice on Manowar’s ‘Battle Hymn’, for those of who were actually toddlers when Tales of Mystery And Imagination first came out he was the fat bloke doing sherry adverts and the odd interview on Michael Parkinson’s late night BBC TV chat show. Ever chasing funding to make movies never made, he seemed to hack out a living taking on often menial jobs. Fortunately, his voice gravitated beyond the schlock and on Tales he’s a perfect match. A tragedy his recordings didn’t surface in time for inclusion first time round, because the radio presentations and 1976 Griffith Park Planetarium launch of the original album that are featured across the CDS featuring his voice must really have made first time listeners take heed of his proclamations.

‘A Dream Within A Dream’ opens Disc 2 with Welles’ pitched narrative drawing us in as oriental piping seeps through the cracks while a bass guitar repeats a single note heartbeat felt until the song take flight with full band;  a curling guitar motif and swelling vocal harmonies  evoking Camel, Floyd and naturally Pilot. The bass remains upfront but the beat changing to a slower pace with Poe’s classic poem ‘The Raven’. This track features the first recorded appearance of a vocoder. Much used on disco hits and appropriated for false auto-tuning since, it’s not too different an effect to that used by Frampton and Beck when they wrapped their mouth round a talk-box while playing guitar. Utilised by Parsons himself with additional vocals supplied by Leonard Whiting, the music builds and fades between orchestral sections, soft rock, and some Moody Blues style prog. It’s the wailing 70s Echoplex guitar solo followed by an emphatic chant of “Quote the raven nevermore” that evokes Bowie-era Diamond Dogs that I appreciated most.

Come ‘The Tell-Tale Heart’ there’s some mid-paced rangy hard rock and the wonderful surprise of a virtuoso vocal performance from Arthur Brown, who most of us still only know from his classic hit single ‘Fire’. His voice is at once evocative and powerful, phrasing each word so precisely and all the more emphatic when you hear the distress and panic in the latter part of song as the story’s twist ensues. The way he yelps and screams you wonder if he was an influence on Ian Gillan. It climaxes with over the top orchestration and Dave Gilmour style solos dipping in and out. Both Disc 2 and Disc 3 feature guide vocal versions sung by Woolfson and at best point the way towards pleasant AOR.

‘The Cask Of Amontillado’ has more than a little of The Beatles ‘She’s Leaving Home’ about it, but rearranged with Zombies come Moody Blues harmonies courtesy of John Miles and The Hollies’ Terry Sylvester. However, it’s the way the drums and brass section work in the arrangement giving this a ‘MacArthur Park’ feel that holds your attention. Can you imagine Peter Gabriel doing a Bowie and strung out on coke in LA while writing The Lamb Lies Down On Broadway but getting West Coast rock session musicians to play on it? That my friends is ‘(The System Of) Doctor Tarr & Professor Fether’ – wherein a sugar sweet cuteness washes over a malignant underbelly of dark lyrical narration, with Jack Harris joining Miles on vocals for this one.

With The Fall Of The House of Usher (Suite) you can enjoy the Debussy influenced piece as heard on Disc 1 and Welles lecturing to pass wisdom and warning on during Disc 2 is only brief, albeit the keyboards dove in and out underneath. More so as the piece extends I am again brought to mind of Genesis members moonlighting from their main gig, in this case Steve Hackett’s guitar overlaying an art rock tune, then it concluding with what sounds like a stand up double bass and harpsichord playing a compelling melody that really should have been appropriated for some 70s TV drama’s theme tune. The original album ends with something of a coda in ‘To One In Paradise’ – a balmy sea lullaby with heavy overdubs as vocals seep in and out.

Certainly it’s Welles who gives Disc 2 some oomph, though there also appeared to be more wah-wah guitar present in the mix on Disc 1’s original version of ‘The Raven’ that I favoured, whereas its demo on the same record sounds like Caravan and Family with a few too many sherberts inside them jamming on a vaudeville version of the tune. Of the extra pieces on Disc 2 one may be perplexed by why there are sheep noises on a track titled ‘Sea Lions In The Departure Lounge’. It is easy to dismiss Disc 3 as only being for completists to analyse composed as it is mainly of demos, rough mixes and piano versions, or in the case of A Dream Within A Dream’ a recorder version too. However, while there are assorted interviews with Parsons and Woolfson scattered across the CDS, the one on this from 1987 is worth dipping back into between replaying the main album tracks. It proves to be a long and earnest discussion related with hindsight, and some amusement at how others considered their work sophisticated and hi-tech whereas the reality was more of a Heath Robinson drawing forced into practical reality.

As a standalone album Tales of Mystery and Imagination feels quite short, but then they were. The studio techniques are of their time, and yet don’t feel dated, albeit that modern ears might find the music at times a little too pastoral. For most of us, listening to different remixes and leftover tunes is fine once but we’d rarely revisit them, preferring the definitive versions of the tunes. However, for me coming to this 40th anniversary collection brand new, it’s the 1987 remix that I’ll be replaying most. 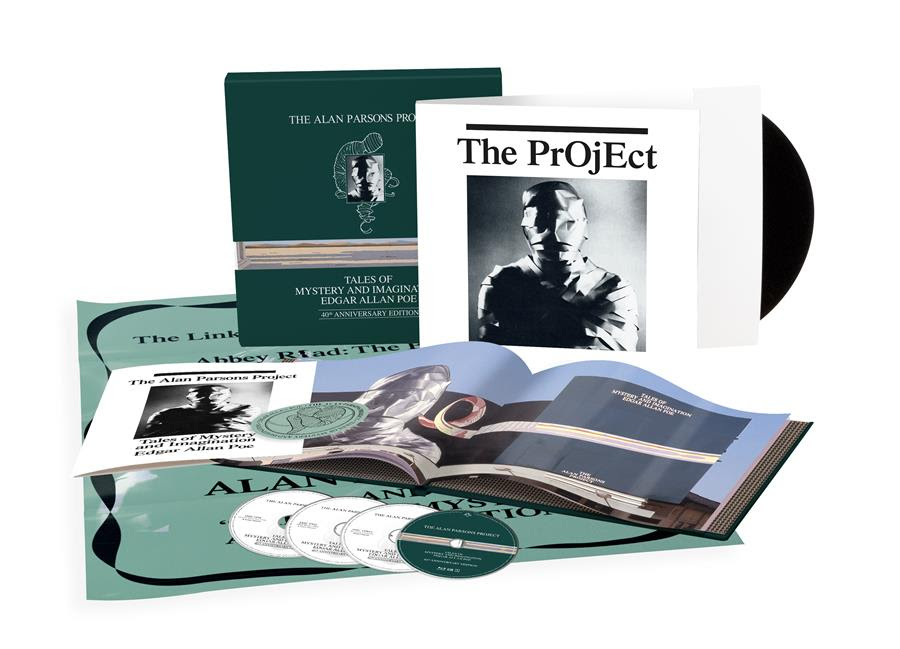