We might have one of the best newcomers on our hands.

Indian Black Metal. Well, that’s one thing off the bucket list. Beside Typhonian Wormholes…, Tetragrammacide have only released a demo so far which was apparently good enough to land them on the roster of Black/Thrash/Death powerhouse Iron Bonehead. Becoming a bit jaded about war metal lately, I was expecting some competent, if unoriginal material in the vein of Blasphemy and Sarcofago. Boy, I was fucking wrong.

Exploding into the speakers following the weird intro, ‘Paramilitant Entropic Initiation’ basically ripped all my cynicism and doubts into shreds and shat all over them. While the influence of Canada’s infamous Satanic Skinheads is present (though Nyogthaeblisz and fellow South Asians Konflict would be better reference points) there are many elements that prove that Tetragrammacide is its own beast. The instrumentation is refreshingly different from the bog-standard of the genre: while with most war metal bands one, regardless to the musical cacophony, can discern the instruments used, these Bengali destroyers deny this kind of luxury from the listener. The music found on Typhonian Wormholes…, is sometimes more akin to harsh noise than black metal, the grinding drums and the savage, snarling vocals being all that emerges from under the asphyxiating wall of abrasive guitars, bass and who-knows-what else.

Most Black Metallers will probably hate Tetragrammacide, being way too removed of the run-of-the-mill “extremity” of war metal (mostly measured in muscular Christ-raping goat-demons). Those few of us however who appreciate musical darkness and savagery regardless of genres, we might have one of the best newcomers on our hands. 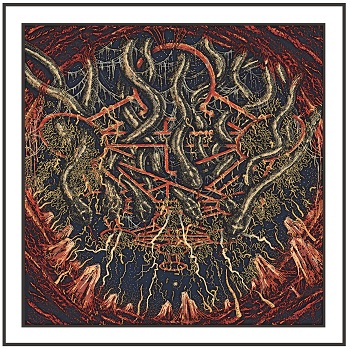