In these modern times, it’s usually the case that you count the gaps between bands releasing albums in years, so to have a band release two albums of new material within the space of eight months is unusual to say the lease. Recorded at the same time as the band’s previous release, the unfortunately named Albion, which came out just before Christmas 2014, it’s also the second outing for the band’s latest, three guitar, line-up. Gary Hughes has explained that he so much material written when the band came to recording, and he felt that it was all of a sufficiently high quality to release. It’s not clear why the band didn’t release a double album, unless they felt it wasn’t a viable commercial proposition, or as ‘twin’ albums, as FM did last year with ‘Rockville’ and ‘Rockville II’, but whatever the strategy, it’s good to see the band being so productive again after a long barren spell from around 2004 onwards.

Similarly, however the band lines up, Ten fans can be reassured that this definitely sounds like a Ten album, and looks like one, too, with the Frank Frazetta-like artwork, this time courtesy of Gaetano Di Falco, which seems to have become a trademark of the band over the last few years, and a lot of the music is put together in a way that long standing Ten fans will be familiar with too. The opening track is composed of two sections, an instrumental opener, ‘Buccaneers’ and the main body of the song, Dead Men Tell No Tales’. It’s a device the band have used a number of times over the years, going back to their first album, and it’s used twice on this particular record.

And that illustrates something that made me think a bit when listening to the album, in that it all sounds very familiar, so recognisably Ten. Gary Hughes’s double tracked voice, the guitars, whether it’s three or two, it does get a little samey after a while. Yes there’s the occasional ballad, and ‘This Love’ on this album is a typical Gary Hughes ballad. This is not to say it’s bad, but even with the revised line up, the band rarely seem to be doing anything new.

When they do try something slightly different, as on the track ‘Acquiesce’, with its sinewy riff, it works well, but when a track like ‘The Dragon and St George’ instantly reminds you of an older track, in this case ‘The Alchemist, from the ‘Spellbound’ album, again, a decent track in itself, but you’re always left with the feeling that the band are being careful to stay with their own limits, and that there’s always something really striking or even epic just waiting to burst free. The other ‘instrumental/main track’ song on this album is ‘Karnak/The Valley of The Kings’, which revisits the theme of the mighty ‘March of the Pharoahs/Wait For You’ on ‘The Name Of The Rose’, possibly my favourite ever Ten track, but the question is why go back to an old theme when all you’re doing is invite comparisons with a previous, much loved song?

The other issue I have with the album is the lyrics. Hughes has always been a very ambitious writer, with historical and fantasy references common themes in his songs, but sometimes the impression is that he’s trying a little too hard and the flow of the song suffers. ‘Tell Me What to Do’, with its opening lyric of ‘Wet from the womb/Beltane in bloom/Such a cacophony/Of ideology’ and a reference to ‘Mandrake Twilight’ are just sequences of words that fit the melody, rather than creating images in the listener’s mind, but on the other hand, ‘Intensify’ is uncomfortable listening if it’s not supposed to be a parody of something written by a 70s or 80s hair metal band. When it does come right, it’s hugely effective, as in ‘Revolution,’ about the French Revolution, and it works far better.

As a Ten album, it’s a decent album, and very listenable, without ever reaching the heights of The Name Of the Rose or Spellbound, although songs like ‘Revolution’, ‘Acquiesce’ and ‘Valley Of The Kings’ certainly hit the spot. The latter, with its Kamelot-like riff is definitely the kind of thing I’d like to hear more of. But parts of it are very generic Ten, and often you’d really like to hear the band stretch themselves, even explore the possibilities of the triple guitar line up a little more. Maybe an outside producer would be worth thinking about, although I’m aware economics plays a part in this kind of thing, but someone or something to make the band really stretch themselves and reach outside their boundaries could, in my humble one, only do the band good. 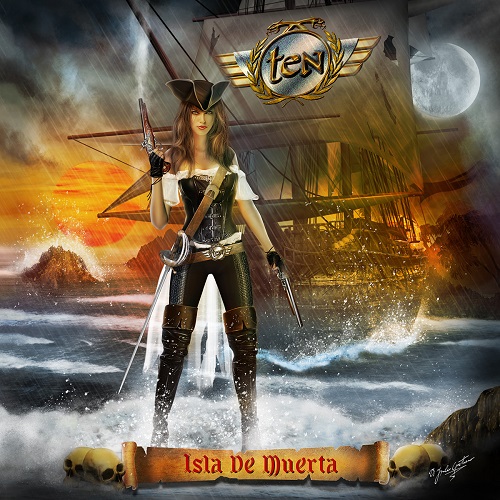