You’d expect an album with five guest vocalist to sound wildly eclectic, especially when each of those singers is instantly recognisable, and a leader in their respective field. However, the latest album from the Taz Taylor Band hangs together effortlessly. With a core that’s been together for two decades, this combo are a tight unit that display a timing that teeters on telepathy and gives Nocturnal a cohesion that ensures the 12 tracks like interlocking teeth on cogs.

With some music you only have to hear a few notes and you know you’re in for a good ride, and that’s certainly the case with Nocturnal. The wonderfully fuzzed up riff that heralds the arrival of ‘Wasting My Time’ is the stuff that (rock n’ roll) dreams are made of, and when the rhythm section kicks in, it becomes manna from heaven. The driving beat is totally infectious, and if it doesn’t have you reaching for your air guitar, then I suggest a new pair of ears. In fact, there’s only one thing that could make this piece of rock candy even sweeter, and that’s the addition of David Reece. One of three tracks to feature the former Bangalore Choir and Bonfire warbler, he breathes life into ‘Wasting My Time’ so that it becomes a definite statement of intent, and sets the bar high for the rest of the album. Perhaps only Mark Boals (Yngwie Malmsteen, Iron Mask) could follow Mr Reece, and he stamps his personality all over ‘Live Fast’, a rocker that’s looking for trouble and comes out with both dukes swinging.

There’s an ‘80s vibe permeating much of this album; it recalls a time when rock bands actually wrote whole songs (rather than song parts) and they weren’t afraid of soaring guitars and anthemic chorus’ either. However, make no mistake, while the Taz Taylor Band may take their cues from rock’s golden age of rock (fans of MSG, UFO and Gary Moore will find a spiritual home here) they’ve an energy that renders them contemporary, and they can more than hold their own with today’s young whippersnappers. Creating an alternative reality where the alt-rock revolution never happened, the Taz Taylor Band have produced an album that’s guaranteed to get the blood pumping many years hence.

The cover which houses Nocturnal is pretty indicative of the sound contained within; a juggernaut appearing from a fiery backdrop and, just like that image, Nocturnal is an unstoppable force. Irrepressible Scottish singer Doogie White (Alcatrazz, Malmsteen, Rainbow) adds his pipes to the moody ‘Raw Nerve’, and gives the track a distinctly Deep Purple MKII vibe. Taz Taylor Band have also released several instrumental albums (most notably Big Dumb Rock) and three tracks, sans singer, pepper the record to inject a nice change of pace. ‘George’s Song’ is a beautiful acoustic interlude, and makes a nice foil for the staccato ‘Realize’. The neat vocal inflections on ‘The Accidental Tourist’ could only belong to Graham Bonnet and, standing tall amongst some serious competition, turns in a career defining performance. Chandler Mogel (Outloud) makes an appearance on the bluesy ‘Blue’ and turns it into a delicious slice of AOR heaven before the soaring title track proves that music can say more than words and brings the curtain down in epic fashion.

From morning to evening, and noon ‘til night Taz Taylor Band have produced an album in Nocturnal that sounds good any time of day. 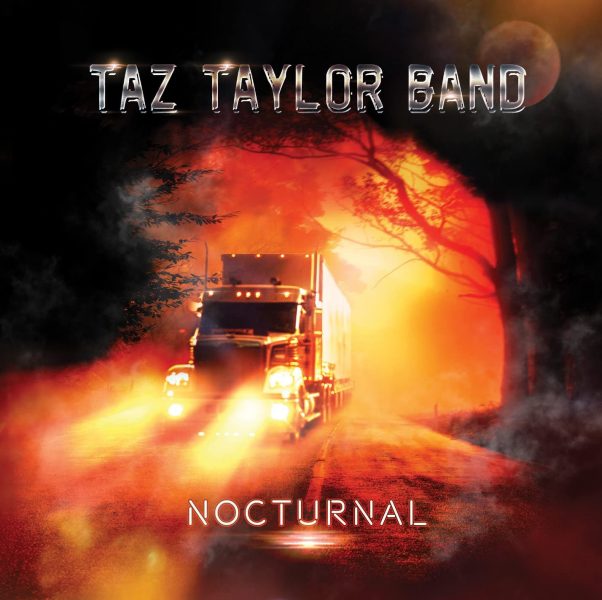