During 1973’s Yom Kippur war, a motley Israeli force of patched up tanks held the base of the Golan Heights against overwhelming odds. Irrespective of your political leanings, it had to be seen as a memorable act of heroism. The area in question was known as the ‘Valley Of Tears’. Tank’s new album then is a tribute to those fighting men. And 40 years after that battle, it is also pitched as something of a metaphor, reflecting heavy metal’s heroic last stand against changing tastes and corporate dominance.

Cliff Evans and Mick Tucker are still the heart, soul and twin guitar driving force of the band, but Doogie White has gone, to be replaced by South African vocalist, (and ex Dragonforce) ZP Theart. Theart’s voice lacks White’s distinctive operatic tenor, but he combines conviction with subtlety, scaling up his performance for those epic moments that appear at least once-a-track. For Tank aficionados, Valley Of Tears will sound like meeting an old friend who has changed little, and while every track is a calculated tilt at classic metal, there are few that fail to meet the exacting, old school standards required.

The earthmoving ‘War Dance’ is probably the pick, a surprisingly melodic hard rock track, pushed along by the propulsive energy of the Evans/Tucker axe axis, helped by a powerful percussive thump. In fact, the whole album has a sure footed melodic grip, carrying it purposefully through the territory that the band staked out back in the days of Algy Ward. And on the evidence of ‘Living A Fantasy’ and ‘One For The Road’, Theart’s addition to the writing collaborations may have pushed the band to songwriting peaks hitherto unheard.

‘Eye Of The Hurricane’s clanging guitar swagger might remind you of Big Country – there’s a faint celtic twang evident before it settles into a hulking, hard rock groove. And in the title cut we have one of those transcendent rock tracks that any decent band would love to have as its epitaph. Valley Of Tears is a recording that you feel sure has popped out the studio womb fully formed and ready to hit the ground running. It won’t win any medals for innovation, but it’s ready for the fray. 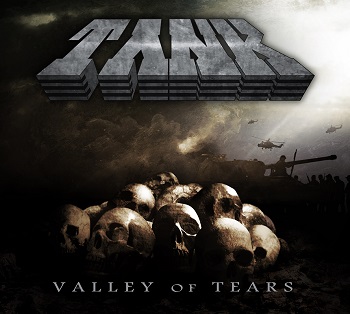