So, as promised just a few short weeks ago, we arrive at the release of The Sessions volume III from electronic pioneers™ Tangerine Dream. We’ll endeavour to keep this review mercifully brief, I mean there’s only so much you can write about improvised electronic music without repeating yourself (and I sailed from that particular shore a long time ago) and here we are at the third (double) album – that’s about four and a half hour of drones, bleeps, blips and rain FX.

Volumes I and II are reviewed here…and here. Ok, there’s the skinny, let’s go. Disc one sees our heroes arriving in Hamburg to deliver a slice of ambience painted in more pastel shades than those of the somewhat urgent vol.II. The recording is, as ever, crystal clear. You could cut glass with the diamond sharp edges of this soundscape. It’s taken at a much more relaxed pace and, to these ears, is very Eno. Notes float – some high, some low, calling to each other across psychedelic vacuums of time and space. The helicopter thrums from vol.II also make a return. The violin edges to the fore, briefly adding Middle Eastern textures before the electronics engage in a tussle for dominance. 80’s Sci-Fi minimalism also makes a welcome return giving this session a warm glow of nostalgia. A piano appears, sounding wonderfully organic and adding a much needed human element to this synthesized landscape. Electronic sound effects skitter like rodents in the background before it all fades into a fog of ambience. Overall it’s one of the most one-note sessions so far. It doesn’t feel like it has a narrative – which is no bad thing, it’s just more relaxed, more holistic. It’s just being, man.

The band then travelled the 290km inland to Berlin. Their hometown. The spiritual home of electronic music. Eno, Bowie, Iggy, the corroded, industrial fug of decadence and ennui, it all began here…no pressure then. The trio take the stage to rapturous applause and begin to bathe us with huge waves of sound. They’re not holding back, it’s clear they’re going to throw every trick in the book at us. There are shades of Vangelis’ classic Blade Runner soundtrack here. It’s steady, controlled, a subtle mix of confidently relaxed and harshly urgent, there’s a definite motorik beat. And on it goes, suddenly, subtly, time begins to fragment until a new sinister beat appears. it gets much more insistent…and intense, hypnotic ambience you can (kind of) dance to. Mechanical clanks herald a gear change, it becomes more percussive and, erm, bleepier. It continues to drone mercilessly forward, with the occasional detour. And breathe…it finally begins to chill, we’re back to the tempo’s of the earlier movements.

A final chorus of crackles and blasts of static interference assail us until peace finally reasserts itself, fading out to an echo, a whisper before the sound of several thousand mightily impressed Berliners fills the hall.

Volume III continues the effortless quality of these live releases. The performances astound and carry forward the legacy of one of the great electronic bands. Tangerine Dream head into the 2020’s with as much, if not more, relevance than ever. Special mention must also be made of the special edition coloured vinyl editions of these albums. If you’re a vinyl freak then these are not to be missed! 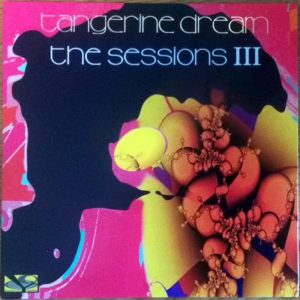