Ok, the above video has nothing to do with ‘Sessions II’ other than the fact that it’s Tangerine Dream. I could post a session but they tend to be around 45 minutes long and I doubt you will watch it, however much of a fan you are. Whoa there cowboy, I hear you cry, what exactly is ‘a session’. Well, prog electronica pioneers Tangerine Dream, in honour of their 70’s free-form shows, always incorporate a lengthy (hence the previous 45 minute comment) fully improvised “session” into their live performances, and ‘Sessions II’ is the cunningly named follow up to 2018’s ‘Sessions I’ (read our review here).

So let’s try to avoid too much repetition here. Pioneering band, Prog 70’s, more structured soundtrack era 80’s. Live shows try to bridge these two incarnations while honouring the late Edgar Froese, their founder. Session II is a double album, each track, or disc for those of us listening on frankly gorgeous coloured vinyl (which I heartily recommend) is a separate improvised session, both of which, in this case, were recorded in the Netherlands at the E-Live festival in 2017.

For those who own, or have listened to ‘Sessions I’, you’ll notice that the album cover, while retaining it’s computer-generated psychedelic imagery, is markedly darker this time around. And for good reason. The music is, on the whole, darker. Harsher, more sinister. It’s also longer, previous sessions tended to be closer to the 30 minute mark – The Dream are growing in confidence, stretching out. Man.

And the music is stunning. If you’re a fan of electronic music you just need to listen to this. If you’re not you could still do a lot worse. Relax, good reader, I won’t waffle on about it for too long – there’s nowt much worse than overblown writing about instrumental music so we’ll keep this to a minimum. It’s a very subjective thing. Music, especially without lyrics to take you by the hand and lead you, will paint vastly different pictures in the minds eye of everyone who listens to it and Tangerine Dream genuinely appear to be creating guided visualisations, giving you hints and cues. You bring your own experiences, expectations and creativity to the table so let’s avoid anything too subjective or florid (and trust me, I have 7 pages of florid to work with).

Disc one is immediately haunting. There are dark drones which subtly subside. Synths swirl around each other until the electric violin/viola joins the fray. Sound effects are frequent – rain, waves, birdsong and, most frequently throughout, lasers. There are pulses, bleeps, angelic choirs. Melodies appear and reappear. it’s music to float in space to. Becoming more ominous, it throbs, howls, helicopters whirr overhead. It builds to a stunning crescendo until it falls apart and reassembles into something much more healing…although storm clouds are never too far away.

Disc two is harder, more precise. It harks back to their stunning soundtrack work (see ‘Sorcerer’, ‘Near Dark’, ‘Firestarter’), it’s ‘Escape From New York’ soundtracked (lengthily) by various members of Carpenter Brut (who owe TD a huge debt) and Phish. It builds to almost rock dynamics – drones, FX, voices, noises – carving a cathedral of sound. It’s suffused with drama, urgency, it soothes and jars, often within the space of a few seconds. On and on it goes, switching from quite beautiful snippets of piano to pounding industrial motifs. A wondrous final drone, several seconds of stunned, is-it-over silence from the audience, and it is…over. Applause.

So yeah, no writing about the music huh. But hey, when it’s this good there’s no dodging it. The timing of this album’s release couldn’t be better – it’s a period of renewed interest in the band, Steven Wilson has remixed and remastered a clutch of their classic albums à la his work with King Crimson and Yes. Their stock is at a premium and, frankly, they’re on world beating form. The recording, production and mastering (completed at Abbey Road) is first-class.

And the band. Flawless, telepathic, operating at a level that would cause veteran jazz improvisers to stop dead in their tracks and stroke their goatees in appreciation. Their touch and sense of colour and texture is masterful – exactly the right thing seems to happen at exactly the right time – but then only they can know when that is. The ‘Session’ moment of a Tangerine Dream show seems to be akin to the ‘Space’ segment in most Grateful Dead gigs, that moment when the band can set their sights to the heavens and reach for the outer limits. However, this only lasted for approximately 10 mins in your average Dead gig and, as great as it was, it was fairly samey. With Tangerine Dream we’re looking at, on average, 45 minutes and every night is totally unique. Stories are being told around a neon campfire, worlds are being created and destroyed. It’s all totally inclusive, the listener is never ignored, there is no noodling, the band always have something to say.

Tangerine Dream offer the audience a totally new creation, every night. An event put together in the moment, on the fly, in the now. Something that only that particular group of punters on that particular night will ever experience and it’ll be different for every one of those people who is there. ‘The Sessions II’ is, to these ears, the greatest, most immersive 90-minute aural sci-fi story. Ever. What will it be for you?

Stay tuned for ‘The Sessions III’… 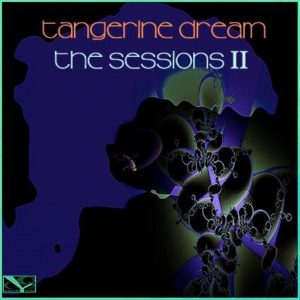